Michigan death metallers THE BLACK DAHLIA MURDER will release its ninth studio album, „Verminous“ on April 17 via Metal Blade Records. The disc is described in a press release as the band’s „most dynamic, rousing and emotional release to date, and it achieves this without compromising one iota of heaviness.“ In a recent interview with Alex Haber of Heavy New York, frontman Trevor Strand discussed the first single and title track and whether it’s an indication of how the rest of „Verminous“ sounds. „I’d really say it’s the tip of the iceberg,“ he said (see video below). „It’s a very straightforward track compared to the others on the album. There’s a real variety on this record. I think more variety between songs than we’ve ever had and that’s something we’ve been striving for in the last handful of records, to really make an album that’s a roller coaster with lots of ups and downs and dynamics. It’s kind of all over the map. ‚Verminous‘ the song is a straightforward thrasher, but there’s all kinds of stuff to come. Some groovy songs, some mid-paced songs.“ Strand was then asked whether „Verminous“ is a continuation of 2017’s „Nightbringers“ or if it embarks on new territory for the band: „I think it’s the biggest evolutionary step we’ve taken between two albums,“ he said. „In a way, ‚Nightbringers‘ is kind of the flavor of what’s to come, having Brandon [Ellis, lead guitar] come into the fold and him putting his stamp on that record definitely marked a new era for us. This record sees him coming into full-bloom with the band. He’s really throwing down the gauntlet with what he’s brought to the band this time. I hate to use the word ‚maturing,‘ because it kind of scares people in the realm of metal. You think of maturity and I think of selling out and it being bad or something, but just as we’ve gotten older as a band, I think we’ve learned how to be better musicians. I think we’ve learned how to write better songs. A lot of it is in the really small details of things. There are really small ins and outs of songwriting. We used a lot of clever ideas this time. There’s a lot of textures and emotive parts, parts that can kind of evoke an emotion in the listener, which is all you can ask for, really, all you want. We want to be a dramatic band; a cinematic band. We want it to feel like a story or a ride.“ THE BLACK DAHLIA MURDER tracked drums at The Pipeyard in Plymouth, Michigan with ex-bassist and longtime studio guru Ryan „Bart“ Williams. The bulk of the album was recorded in New Jersey at Ellis’s home studio, the Shred Light District, then mixed by Tue Madsen and mastered by Alan Douches. In support of „Verminous“, THE BLACK DAHLIA MURDER will first head out to South Africa in March, before hitting the road with TESTAMENT for a North American tour, featuring MUNICIPAL WASTE and MESHIAAK as openers. The band will also return to Europe this summer for the festival season, appearing at Hellfest, Bloodstock Open Air and more. 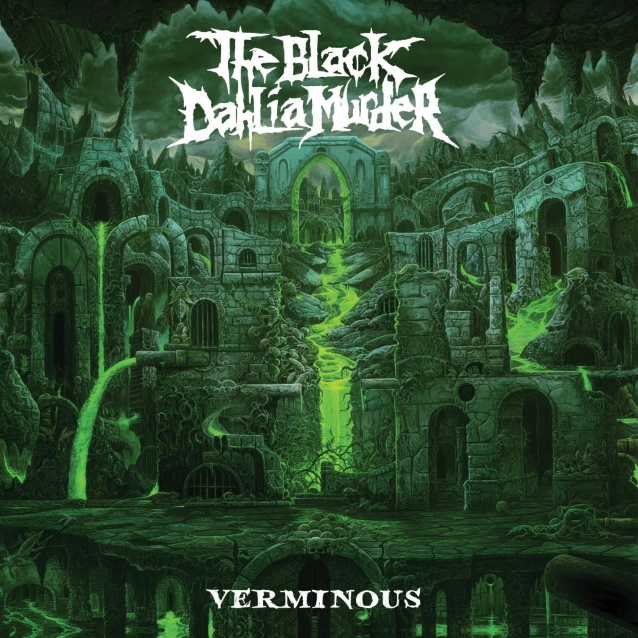