The Sudio TOLV is the debut launch of the company’s first True Wireless System, (TWS), featuring BT5.0, a graphene dynamic driver and 7 hours battery life. It is priced at $129.

Disclaimer: The Sudio TOLV sent to us is a sample in exchange for our honest opinion. We thank Sudio for this opportunity.

To learn more about TWS reviews on Headfonics you can click here.

Note, this review follows our new scoring guidelines for 2020 which you can read up on here.

Sudio is new to me but then again I am a relative latecomer to TWS. I do know they have more than the TOLV with traditional “wired Bluetooth’ and ANC headphones offerings so they are not one-hit wonders.

In fact, the TOLV TWS is a second iteration building on their initial Niva TWS offering in 2018. I do not have the Niva here to comment on it but the current opinion seems to be that the TOLV is an improvement.

For those that need or want to know. Sudio hail from Sweden and the name is a combination of Swedish and Studio. I am sure glad they didn’t go with Audish or Swedio as it doesn’t quite have the same ring to it.

In any event, as someone who hails from just below them geographically speaking, The TOLV has to be the most Scandinavian looking visual aesthetic yet encountered on a TWS to date. That means it is pretty sweet on the eye which would need to be the case at $129.

The TOLV is one of 3 current Sudio TWS offerings, including the TOLV R and the Fem. Each has its own characteristics with the TOLV being probably the most audiophile of the three because of the use of a graphene dynamic driver.

Graphene diaphragms, if done right, are better propositions than regular paper composites or plastics. These are lighter and stronger whilst being thinner at the same time. Most will pitch graphene properties as more conductive with potentially lower distortion than regular diagrams.

The single dynamic driver TOLV uses Bluetooth 5.0. That is pretty much the minimum standard now for anything looking to be successful in 2020. Still, plenty of higher-priced models using BT4.2 though to be fair, most have been out a few months to a year already. BT5.0 should provide for a better range and stability compared to the older BT4.x versions.

Sadly, the TOLV has no IPX rating or aptX decoding capability. Nor does it have any voice assistant control system. This is strictly SBC and ACC and may not be advisable for gym use of outside inclement weather. 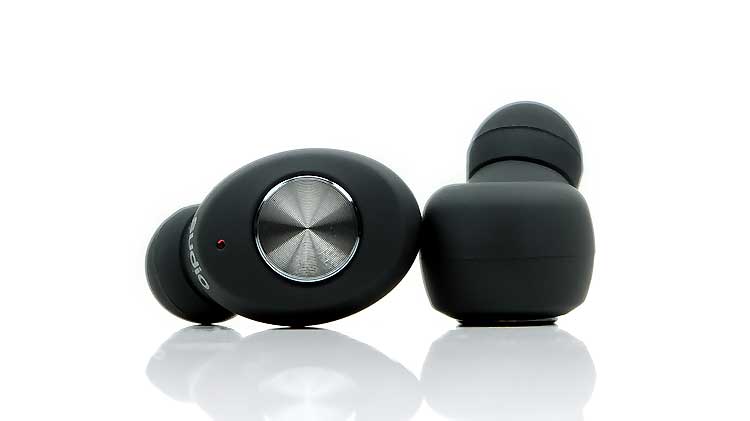 The design and finish of the TOLV are every bit as cool as I had hoped for. This is a dash of Apple mixed in with those minimalist clean lines you tend to see floating around the top shelf of hip consumer electronics stores. If Astrotec alluded to the Nordic visual with their nylon cloth cut for the S80, then the TOLV is authentic Scandinavian ‘fashion’.

The matte black driver housings are understated but impeccably finished. The form factor is just slightly larger than the Airdots but narrower and shallower than the TEVI driver shells. I love the clean circular aluminum control disc central on the faceplate also. Makes for a nice contrast from the otherwise monotone black and white.

The coating on the drivers also has this rubbery texture that reminds me of the HELM TW5.0 finishing. I actually like this material a lot. Not only is it very comfortable against the ear but it also seems grippier than the polish shine of something like the MPOW M5 housing.

The one design area of the TOLV I am not mad keen on is the very short nozzle. That created a few issues for me which you can read in more detail in our Comfort and Isolation critique below.

The TOLV are actually quite comfortable with a similar rubbery finish as the HELM TW5.0. That finish gives them a grippy type feel in the ear so they are fairly secure despite not using any hook type engineering.

This is also one of the better physical control type TWS systems for not getting jammed into your ear as you press on the faceplate. The length of travel on the button combined with a slightly lighter level of pressure is most welcome.

The level of isolation you can acquire with the TOLV is massively tip-dependent. Therein lies a slight dilemma with regard to sound quality because some tips definitely improve the isolation beyond the generic silicone single bore tips provided but they do so at a cost of a balanced presentation. 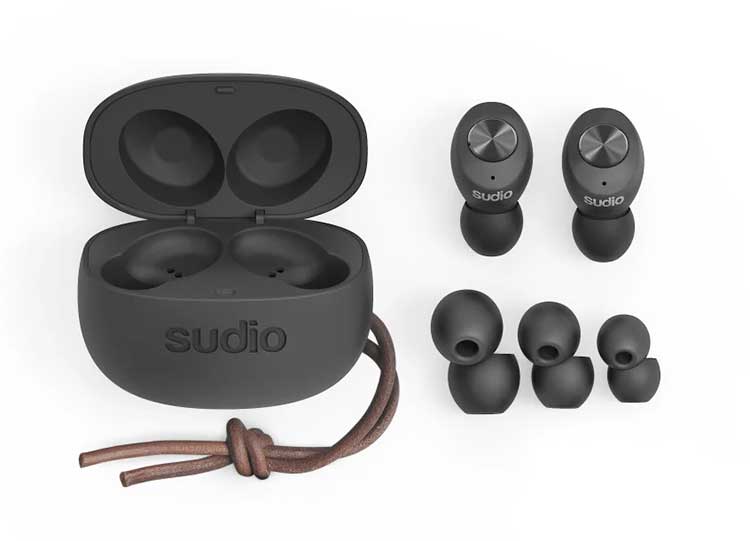 I have actually come across this situation a few times with TWS units. It feels like the driver is either not that strong, too far back in the unit or the nozzle is physically quite short. The end result is any tip with a very long stem might improve seal but in actual fact can push the tip of the nozzle further out of your ear. The further out the nozzle is, the less impressive the sound becomes.

For example, biflange tips go really deep in my ear with the TOLV so on a physical level they are rock steady and provide a bit more isolation. However, the nozzle is technically further out. The sound becomes incredibly tinny, narrow and lacking in any dynamic range.

On the flip side, the stock tips allow the nozzle to go in much deeper but isolate far less. So, you get a more engaging sound but not that much staging depth and power.

The tip game does not end there, however. Any tip that delivers a fantastic seal also means the TOLV’s enhanced bass gets an immediate push forward. Some tips did so more than others, especially hybrids and foam. Foam tips sealed so well but the top end was way too warm and the low-end too dominant. Symbio hybrid tips emphasized the lows and highs but the mids were too recessed and hollow for my liking.

The best balance of seal and sound were in actual fact the FiiO ‘vocal’ tips followed by the Final E tips. Both are silicone in nature and more porous than the foam and hybrids but stiffer and better sealing than the stock tips. The FiiO’s just had the edge because of the smoother top-end and slightly less low-end exaggeration. The Final E tips tended to be a little too aggressive with the treble but the gap wasn’t huge. 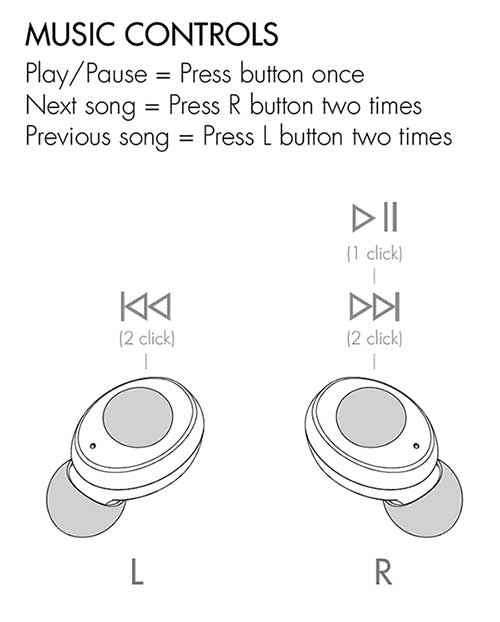 The TOLV uses a physical control system as opposed to touch. I am normally not of fan of physical buttons due to the discomfort when pressing them whilst in my ear. However, this is the nicest implementation I have encountered thus far with a clean short throw on the buttons as well as an angled positioning in the ear that doesn’t create depth discomfort when pushing them.

Certainly, a lot more comfortable to use than the Lypertek TEVI and M5 systems. When it is as easy this then touch controls become less attractive because of the number of accidental activations you get with touch control.

The drawback of the TOLV system, however, is the lack of complete instructions in the manual for first-time users and Voice Assistance control. For example, on playback (see pic above) there are guides for next, previous, play, and pause bit nothing on the volume control.

Volume control is 3 clicks on the right for increasing and 3 on the left for decreasing. I would have preferred if the volume was 2 clicks or one long press as 3 clicks is quite a lot of poking for tweaking sound levels. As for voice control, well there is none of that on the TOLV so no direct access to SIRI, Bixby or Google Assistant. This seems like a missed opportunity in 2020. 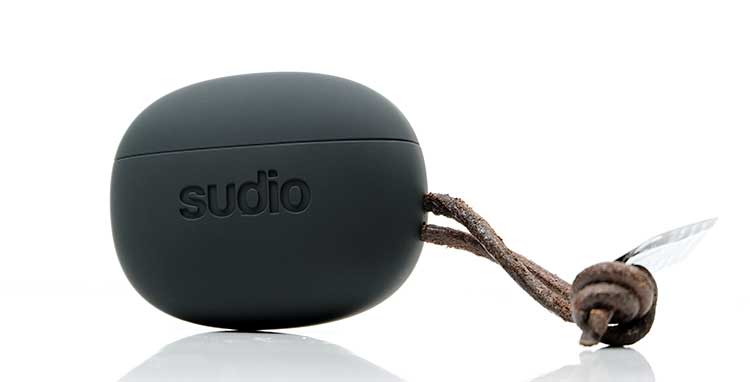 It is cute, rubbery just like the driver housing and impeccably finished with a twist of natural leather for the lanyard. There are small cradles and then there are small stylish cradles like the TOLV.

This case is imminently pocketable with nary a sharp corner to worry the male gender in the process. The inside has just enough space to house the two drivers though the internal lining is plainer plastic rather than the nicer external rubber finish. The hinge on the lid is also mercifully silent, discreet, and smooth in action.

Excellent battery life number and close enough in real-world testing for it to be credible. You are talking 7 hours per cycle on paper and a cradle capacity of 35 hours. Whilst not TEVI levels of individual cycle battery life its pretty close at around 5-6 hours normal volume and a shade longer on low volume. Granted, you won’t get 70 hours from the case like the larger TEVI but 4-5 cycles of 7 hours is very competitive.

Of course, nothing in life is perfect and coming equipped with Micro-USB when the newer FEM unit has USB-C and wireless charging is a bit of a drawback. USB-C fast charging would have made a difference. You can expect 1.5 hours of charging time on the cradle using Micro-USB. 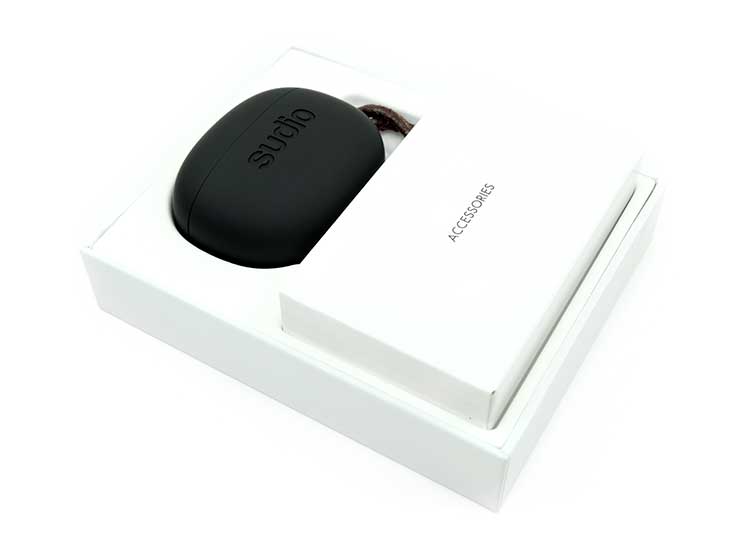 If not content enough to give us the full Scandinavian design experience on the actual units, Sudio has also thrown in some attractive cleanly designed packaging for the TOLV. This is the full white immaculately assembled “Apple” vibe of a retail box and contents. The kind of professional finishing that people love these days, particularly casual shoppers. 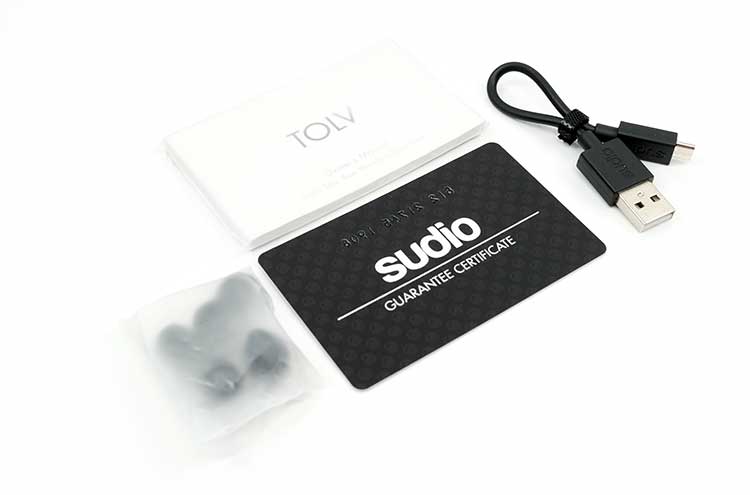 Apart from the leather lanyard attached to the cradle, you also get the single bore silicone tips in small, medium and large. You also get an additional set of mediums on the drivers out of the box. Additionally, Sudio has included a very short Micro-USB cable, a guarantee certificate and a think multi-lingual user guide. The guide is also available to download from the website.