After a sold-out winter run on the „Diseased & Disguised“ tour with BEARTOOTH and tallying 50 million-plus streams on its latest album „Disguise“, MOTIONLESS IN WHITE has announced „The Black And Blue Tour“. The Scranton, Pennsylvania band will be joined by special guests KNOCKED LOOSE, STICK TO YOUR GUNS and OVTLIER. The trek kicks off April 28 at Pops in St. Louis, Missouri and rolls through cities in the Midwest, South, and Northeast, before closing out May 23. A limited number of VIP packages will be available Wednesday, February 26 at 10 a.m. EST with all tickets going on sale Friday, February 28 at 10 a.m. local time. MOTIONLESS IN WHITE frontman Chris „Motionless“ Cerulli says: „After years of trying to make it work, the time has come. We are so stoked to be touring with our friends in KNOCKED LOOSE, as well as our longtime friends STICK TO YOUR GUNS and OVTLIER. Hitting cities in the U.S. we rarely get to see has been a big goal for this album cycle, and this tour continues to push in that direction. Looking forward to seeing some new faces.“ Tour dates: Apr. 28 – St. Louis, MO – Pop’s
Apr. 29 – Memphis, TN – Minglewood Hall
Apr. 30 – Nashville, TN – Cannery Ballroom
May 02 – Mexico City, MX – Domination Festival*
May 04 – Austin, TX – Emo’s
May 05 – Corpus Christi, TX – Brewsters
May 06 – Baton Rouge, LA – Varsity Theatre
May 08 – Daytona Beach, FL – Welcome To Rockvilile*
May 09 – Myrtle Beach, SC – House Of Blues
May 10 – Raleigh, NC – The Ritz
May 12 – Huntington, NY – Paramount
May 13 – Albany, NY – Upstate Concert Hall
May 15 – Richmond, VA – The National
May 16 – Wilmington, DE – The Queen**
May 19 – Lexington, KY – Manchester Music Hall
May 20 – Ft. Wayne, IN – Clyde Theatre
May 22 – Moline, IL – Rust Belt
May 23 – Lincoln, NE – Bourbon Theatre
May 24 – Pryor, OK – Rocklahoma* * Festivals without STICK TO YOUR GUNS, OVTLIER
** Without KNOCKED LOOSE MOTIONLESS IN WHITE’s latest album, „Disguise“ is available now at all DSPs. The disc is highlighted by a series of singles, including „Brand New Numb“, „Undead Ahead 2: The Tale Of The Midnight Ride“ and „Disguise“, the latter joined by a companion video directed by frequent collaborators Jeremy Danger and Travis Shinn. In addition, „Brand New Numb“ was recently joined by an official visual, also directed by Moore. Comprised of Motionless, guitarists Ryan Sitkowski and Ricky Horror, drummer Vinny Mauro, and bassist Justin Morrow, MOTIONLESS IN WHITE has won over audiences around the globe with its aggressive music and arresting imagery, firmly placing the band among the upper echelon of modern rock. 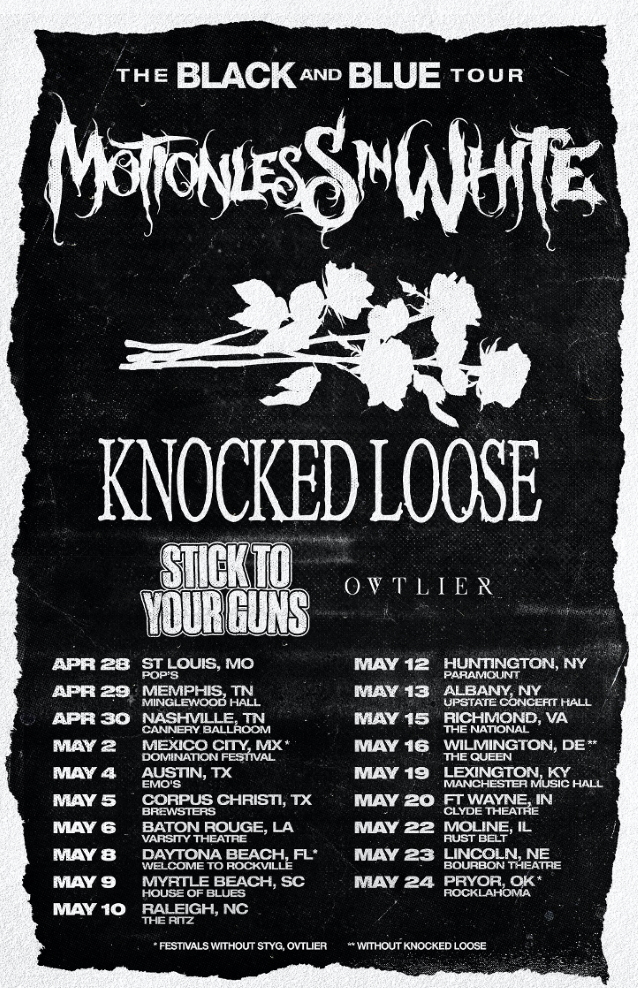