Due to a severe shoulder infection caused by osteoarthritis that has plagued Hellhammer for quite some time now, the MAYHEM drummer will, unfortunately, not be able to perform with his bandmates on „The Decibel Magazine Tour“. According to MAYHEM, Hellhammer „has been working with a physiotherapist for the last couple of months in the hopes that he would be fully healed before the tour, but has ultimately been ordered to rest for some more weeks. Filling in for Hellhammer will be Tony Laureano, who has a prestigious track record as a session drummer for a number of other bands, such as DIMMU BORGIR, NILE, ANGELCORPSE, MALEVOLENT CREATION, GOD DETHRONED, ACHERON, BELPHEGOR, 1349 and BRUJERIA. Hellhammer comments: „See y’all next time!“ „The Decibel Magazine Tour“ will kick off on March 13 in Denver, Colorado and conclude on April 10 in Chicago, Illinois. Joining MAYHEM on the bill will be Norwegian black metallers ABBATH, Arizona desert death dealers GATECREEPER and goth-infused metal upstarts IDLE HANDS. MAYHEM’s latest album, „Daemon“, was released in October via Century Media. 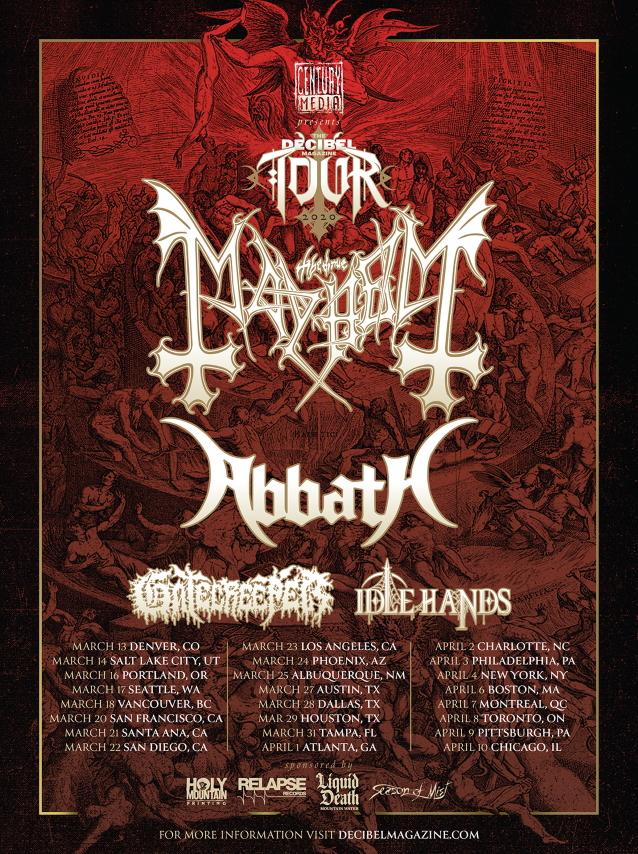