Former GUNS N‘ ROSES and current SIXX:A.M. guitarist DJ Ashba has signed an exclusive deal with Edgeout Records/Universal Music Group/UMe for his new solo project, which will see him „featuring different singers from different genres on every song.“ Although Ashba initially started work on the project as a collaboration with with his SIXX:A.M. bandmate James Michael — under the band name PYROMANTIC — it has since evolved into an Ashba solo venture, with Michael announcing in 2018 that he was stepping away from the group. Ashba comments: „Over the past couple of years, I have found myself going through a musical transformation — almost an evolution, you could say. I allowed my creativity to flow freely without trying to restrain it to conform to a particular genre. I found the whole journey very liberating and also very exciting. It allowed me to experiment with new sounds and compositions that cross the boundaries of multiple music genres, to create something so unique and exciting that I cannot wait to share it with the world.“ Ashba has brought together a formidable team that includes Tony Guanci, Edgeout founder and label head; Bruce Resnikoff, president and CEO, UMe; manager Larry Rudolph, ReignDeer Entertainment/Maverick; Chris Dalston, co-head of music, CAA and Gavin Maloof, founding partner Vegas Golden Knights/vice-chairman, Maloof Companies. Regarding his upcoming solo disc, which will be released under the ASHBA banner, DJ told Fox5’s „More“: „I spent three years in the studio creating this new sound and I took Latin, pop, rock and EDM and I just threw it in a blender as a producer. I’ve done the rock thing, I’ve done that my whole life, but I wanted to create a new sound — something fresh, something anybody could latch on to. If you like Latin, there’s enough of that; if you like rock, there’s enough of it in there. So it’s a really cool, unique sound. I’m pretty proud of it.“ According to DJ, he will promote the LP by embarking on a tour on which he will be joined only by a VJ. Last year, Ashba spoke to „Vegas Junkeez“ about how his new project came together. He said: „It started off in the beginning, me and the singer from SIXX:A.M., James Michael, we had some time off and we started writing like we did. And it eventually evolved, and obviously, it went in a direction, and I pushed it really hard in a direction, and then James kind of got busy and went off [to do] his thing. But it’s evolved into this incredible thing that’s just awesome. And to have congas and horns… And it’s very worldly. It’s designed to make the body move. It’s full-on dance stuff, but it’s great.“ Calling his solo effort his „number one priority,“ Ashba said that he is „so, so inspired“ by the music that he recorded thus far. „This is everything I’ve ever wanted to do,“ he said. „It’s kind of like your whole career, you learn all these things, you work with all these people… [This] is kind of just my labor of love — it’s something I truly wanna do for me — and it’s so gratifying to be able to be in a position… „I’ve had an incredible career — thank god — but this new thing is just the next chapter,“ he explained. „It’s really special, and it’s really a lot of fun. And it’s given me the freedom as a songwriter and a producer just to create any style… Basically, I don’t have to write for one vocalist or one voice… I can write not only for that, but multiple genres, as long as we keep it within kind of these wide walls that we call [ASHBA]. It’s finally my vision unfiltered. So it’s really cool. And I’m excited. I think people are really gonna like it. It’s something completely different than I’ve ever done — something new. It’s very creative. And me being a creative person, it’s the perfect, perfect thing for me, I guess — the perfect project.“ As the founder and CEO of Ashba Enterprises, Ashba draws upon his executive and entrepreneurial skills to run his many companies. He utilizes his longtime experience and expertise from years of developing his own brand in entertainment, multimedia, touring, and merchandise. Through Ashba Media, a design and creative agency, he advises clients, including Cirque Du Soleil, hotel, hospitality, and entertainment industries, to create state-of-the-art custom props, themed environments for events and exhibits around the world. Ashba considers Las Vegas his home and has been a resident for almost 10 years. His business and operations are all headquartered in Las Vegas. Photo credit: Michael Pool Standing in the back row (left to right): Manager Larry Rudolph, ReignDeer Entertainment/Maverick; Tony Guanci, Edgeout Records founder and label head; Bruce Resnikoff, president and CEO, UMe; Gavin Maloof, founding partner Vegas Golden Knights/vice-chairman, Maloof Companies. Seated: Ashba. Photo credit: Todd Nakamine 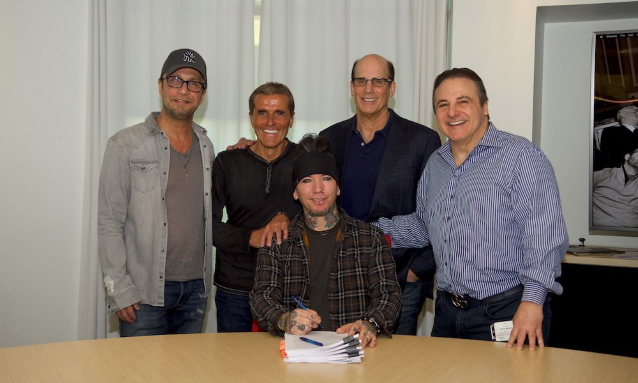