The Cayin E01 Motherboard is the third module released for Cayin’s new N6ii DAP featuring a dual operational mode Class A and Class AB amp circuit design and an ES9038PRO DAC. It is priced at $419.

Disclaimer: The Cayin E01 sent to us is a sample in exchange for our honest opinion. We thank Cayin for this opportunity.

To learn more about Cayin products on Headfonics you can click here.

Note, this review follows our new scoring guidelines for 2020 which you can read up on here.

Cayin has launched the third motherboard for their N6ii modular DAP, the E01. This one promises to be a very interesting new road for the company because it houses some seriously high-end DAC capability as well as not one, but two different operational modes within the amplification design, all into one similarly sized motherboard ‘box’.

I say a new road because the inclusion of an ES9038PRO is the first time Cayin has used one of Sabre’s new chipsets in their DAP line-up. The driver behind could well be drawn from much fo the work done with their TOTL CS-100DAC which also uses ES9038PRO but in a dual implementation.

The E01 is the first Cayin ES9038PRO implementation in their DAC lineup. This is a TOTL DAC solution and though it has been out for a few years now it is yet to credibly trickle down to the portable player market outside of the likes of the AK SE100. Even AK TOTL DAPs have opted for AKM chipsets as Cayin has often done in the past with the N8.

Normally, the reasons for not using the ES9038PRO are due to the cheaper ES9038Q2M solution being more in line with mobile solutions for power consumption and the higher procurement and engineering costs.

Therefore, the modular system of the N6ii offers Cayin a lot more flexibility to try higher-end chipsets without risking the main player project pathway. Simply put, the DAP’s future is not riding on its success of one DAC implementation. The choice here is the kingmaker.

The ES9038PRO is an 8-channel 32-Bit DAC chipset which boosts off the shelf class-leading numbers in dynamic range and SNR. In the E01, Cayin has connected four DAC output channels in parallel as an audio channel. 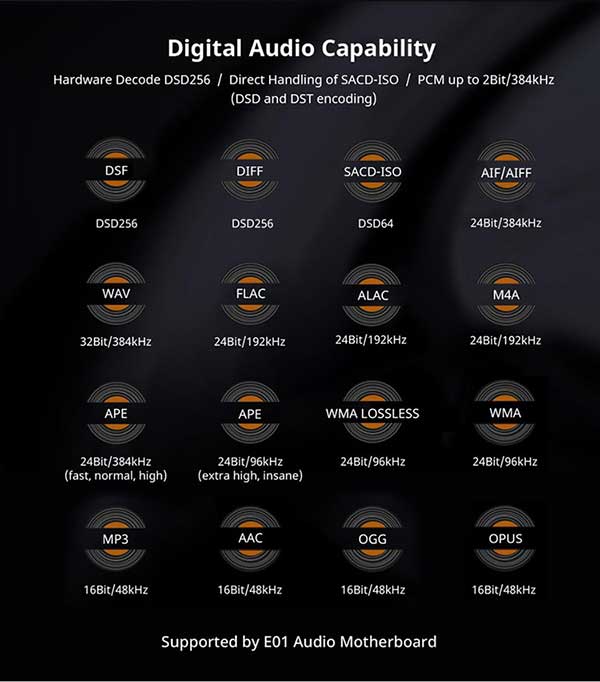 Quite apart from the unique topology requirements, the ES9038PRO implementation delivers a competitive but not world-beating decoding capability. The N6ii/E01 solution is capable of decoding up to DSD256 and PCM 32BT/384kHz. There is no current support for MQA, however.

You could argue this is an industry-standard decoding profile for many DAPs but you could also point out that FiiO’s new M15 can offer MQA 8X and DSD712. We also know that the ES9038PRO on its own is capable of a far higher decoding capability so that the bottleneck resides more in the processing capability of the N6ii player MCU and FPGA.

Fair points, however, Cayin has always been more about amp synergy in their DAPs than bleeding-edge decoding levels. And it is here that the E01 offers some very unique features. 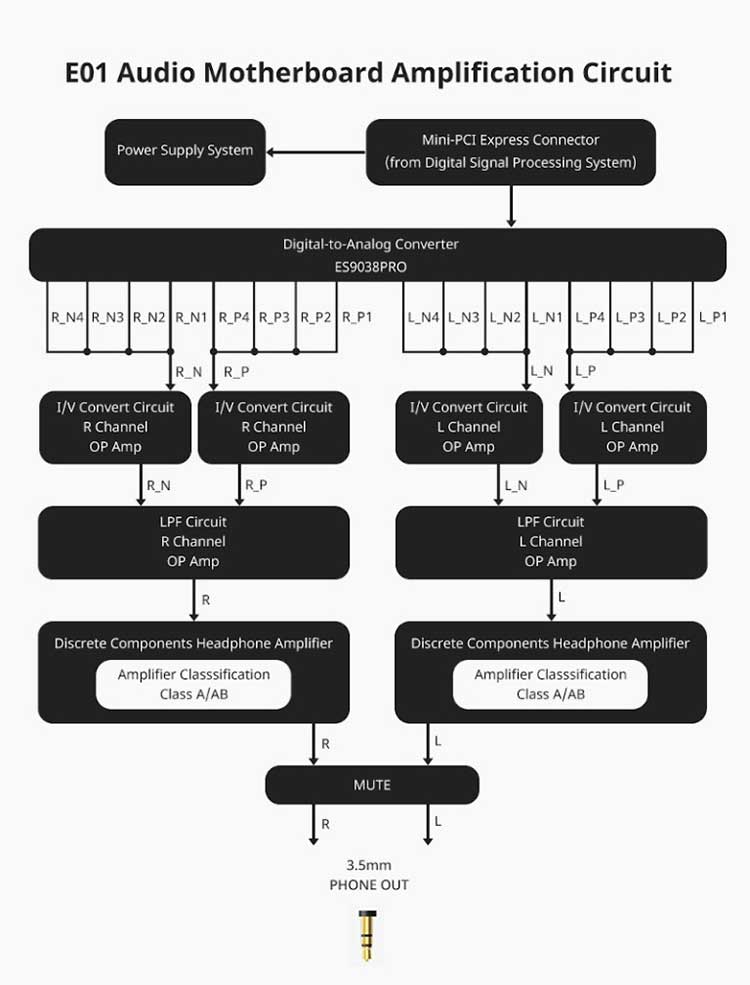 The E01 offers not one, but two operational modes inside their amplification design. A Class A amp and a Class AB amp and they are both switchable. That means you can select the amp classification you want right from the N6ii OS layer in the main player.

More than that the circuit design for both classifications is discreet rather than OPAMP based. Going discreet gives you a lot more control over critical parameters that you typically find fixed inside an OPAMP block, for example, voltage/power and resistor values.

Generally, a well-implemented discreet circuit design should sound better than the cost and space-saving OPAMP route. However, therein lies the rub of going discreet. More space is required for all the additional components such as transistors, caps, resistors, and diodes so something has to give.

In the E01 that means features from the A01 and T01 have been sacrificed in order to deliver the unique DOA solution, balanced and line-out. Instead, we have a single 3.5mm unbalanced output for PO only.

The dual amp output has something interesting, and on paper, slightly ‘misleading’ output numbers. At the top end, where the vast majority of users might be when using a DAP, the E01 is capable of Class A up to 105mW into 32Ω and Class AB up to 150mW into 32Ω.

That would seem rather low to many. Compared to other DAPs at similar price points, their equivalents can be double or quadruple using unbalanced and balanced outputs. However, the performance of the E01 in our testing would suggest these numbers are not the whole story and there I suspect is why discreet engineering is favored. Current and voltage are more than adequate on the E01 to drive larger cans satisfactorily.

Also, the E01 weighted SNR and dynamic range numbers of 119dB for both operational modes are reassuringly consistent and competitive. Nothing worse than switching flavors and experiencing a diminishing dynamic range or volume level between the two amps. They are also higher-rated numbers than the T01 and on par with the A01’s unbalanced output performance rating.

The new FiiO M15 also chimes in at under 1% on paper though I have to balance this advantage out with the much higher 1.4Ω unbalanced and 3.4Ω balanced output impedance rating. That is awfully high for a flagship DAP amp stage.

Thankfully, Cayin has kept the output resistance levels of the E01 DOA design impeccably low and consistent at 0.6Ω each. You will not find an impedance skew here and critically, switching amps will not result in impedance mishaps.

I am honestly not surprised by the 7.5 hours Class A and 9.5 hours Class AB battery life rating for the E01. We are talking a full ES9038PRO DAC normally used for desktop components, Class A amplification and a secondary Class AB option in one small motherboard design.

If prolonged battery life is your number 1 priority I would grab the A01 original motherboard which lasts far longer. Having said that, this is actually not too bad. When you compare it to the DX220’s 8-10 hours and smaller 4400mAh 3.8V Li-Polymer battery it actually looks surprisingly competitive.

Of course, most official measurements are usually done within controlled environments. In this case, Cayin uses WAV 16BIt 44.1K files at mid-gain 30% volume and the screen off. Do not expect to hit those numbers with the E01, especially if you are using WiFi and Bluetooth.

My button bashing, high res app ridden streaming lifestyle chopped off at least an hour off each top-line figure advertised. You may be calmer and more controlled than me. 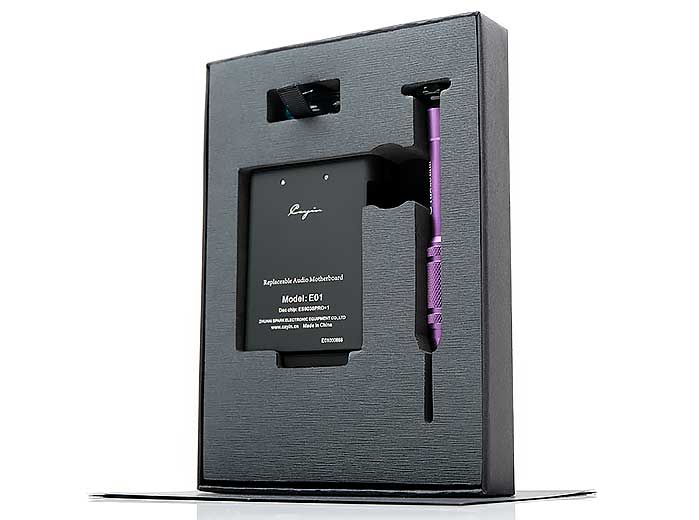 The E01 box is more or less the same unboxing and accessory experience as the previous T01. Just a few small but welcome differences. The first difference I believe is a bit random and that is the color of the screwdriver. I am told that the use of a purple screwdriver compared to the blue of the T01 is not specific to the E01 and some batches of T01 and A01 may also have purple. Both are the exact same screwdrivers by the way so you can use either.

I much prefer these screwdrivers to the iBasso straight head screwdriver. You can apply pressure on the top and twist the main barrel with your hand moving which makes it so much easier to take the screws in and out.

Given none of these screwdrivers are magnetized you can lose them very easily if you drop them. This screwdriver reduces that plus Cayin has included 4 spare screws in the package as additional insurance.

And it is those 4 additional screws that get a useful makeover in the E01 kit. This time they are enclosed in a small blue-tipped plastic capsule as opposed to taped individually into the protective foam. This capsule is also now available in the latest batches of T01 and A01 cards so everyone gets one.

Unlike the iBasso cards, the N6ii motherboards are integrated right into the body rather than as extensions. That means they are designed with only the top panel showing rather than as an extension of the main DAP body. Side by side it is easy to make out their differences from the labeling on the flush side which also includes the DAC chipset specification and serial number.

All 3 cards thus look almost the exact when inserted except for the output configuration which is vastly different on the E01. On the top panel, you simply get that single 3.5mm PO gold bracketed output, nothing else. No line, no balanced PO or LO. 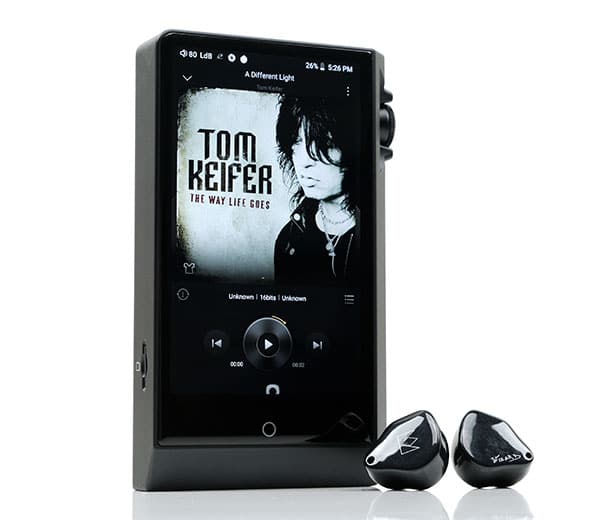 Now, this is a motherboard I can recommend right away and there are a few reasons for that. Let me start with the broad brushstrokes.

The use of the DOA or dual amplification is only clever if it has a meaningful difference in the overall presentation. If this was an exercise in the pure technical domain and nothing else it fast becomes an esoteric pitch. The E01 not only embraces the technical domain in terms of Class A and AB differences it also has a meaningful change in timbre that you can hear right away. That will appeal to everyone.

The tonal changeup reminds me a little of how different the N8 Nutube sound was to the solid-state output. And there is some element also to the precise timbral overtone of the E01 that does indeed remind me of the N8.

The Class A amp stage is warm, smooth and full of velvety texture. It has a bit of soul or character in its presentation with a pleasing and full-bodied low-end even-harmonic distortion and a little less top-end presence than its alternate AB performance.

This reminds me of a homage to the classic SET amplification sound. It is not too aggressive, perhaps even quite lush in the mids and slightly laid back in its treble delivery.

Vocals are to die for even if, by comparison to the AB side, not hugely forward. You get clarity as you would expect from an ES9038PRO DAC but Cayin has learned from their N5ii ES9018 tuning a lot because this is decidedly analog, pleasing and wet in delivery. A very forgiving but in no way a veiled delivery.

On the AB side, the presentation becomes cleaner, tighter, and with more odd-harmonic presence. The timbre is decidedly solid-state in overtones with a cooler coloration and a slightly more aggressive or perceptibly energetic treble delivery. Vocals remain forward, more so than the Class A but the cleaner sound will increase the likelihood of a naturally occurring sibilance as well as deliver more percussion presence and bite.

The tonal switch is, therefore, more akin to turning off that SET and moving to a proper solid-state amplifier replete with all that traditional energy, slam, and vividness you could wish for.

There is a small power difference factor at play for me between these two amp outputs. You have to remember the 45mW difference between the two outputs is constant on 32Ω loads. The gap narrows considerably to just 5mW once you move higher up to 300Ω. The dynamic range and SNR are constant between the two so it is a more critical variable in the technical domain when dealing with efficient monitors.

As an example, the above description of the Class AB as being more energetic can be mitigated somewhat by increasing the Class A side’s current levels by around 2-3dB or around 5 steps on the volume dial. By keeping the same volume you will perceive the Class A side as more muted and by default the less “engaging” output.

This level of tweaking played out nicely with Vision Ear’s Elysium and Cayin’s own YB04 with the Class A sounding optimal with impeccable channel balance control at a slightly higher current level than the AB.