Australia’s Heavy magazine recently conducted an interview with frontman Björn „Speed“ Strid of Swedish classic/progressive rock supergroup THE NIGHT FLIGHT ORCHESTRA. You can listen to the entire chat below. A few excerpts follow (transcribed by BLABBERMOUTH.NET). On the songwriting process for the band’s new studio album, „Aeromantic“: Björn: „We just basically continued. I think I mentioned it before — it’s sort of a band that never stops writing. We never really leave the studio and we keep on having sessions, whether it being a long weekend, two weeks or ten days. I think we’ve taken away sort of the drama on approaching a new album by just keep on going. We don’t do the sort of typical album cycle where we do the album then all the touring and have a break for a half of a year, then start approaching a new album. Plus we don’t really book six weeks in the studio to finish the whole album at once. I think that’s been a very good recipe for us. That’s something we continue to do. I don’t know… The album, each and every album is a little bit different than the other. I think we’ve developed our sound even more. It sounds more personal, even though it’s pretty clear where our influences come from. We’ve created something really focused on this album and really interesting. It’s extremely diverse, but it’s all somewhat connected together when you go through the album.“ On THE NIGHT FLIGHT ORCHESTRA’s prolific recording output: Björn: „We’re building up a vault of songs that keeps growing and growing. We could have released a double album for this one, but we didn’t want to push our luck too much. We found an album that had a very good flow and that’s what it’s all about in the end. There might be some songs that didn’t show up on this album that might come up on the next. That’s what I sort of mean when we build a vault. We might pick them up again and dust them off and re-arrange them. It’s a very creative unit. I think it’s an ongoing thing.“ On how THE NIGHT FLIGHT ORCHESTRA chooses which songs will make an album and whether it’s like „picking your favorite child“ for them: Björn: „[Laughs] Yeah, pretty much. It’s extremely hard. We’re eight people in the band — it’s very hard. What we really try to do is go for the vibe and sort of create this sort of flow on an album. It comes very much like a jigsaw puzzle in the end. Without sounding too pretentious, that’s what it’s all about in the end. Then again, we also release singles. I mean, we also rolled with the times. The album as we know it is pretty much dead. It’s somehow only about singles and EPs these days and streaming services. We also release singles because it also tends to get boring when you only focus on releasing an album, then you do your touring cycle, then it’s over and you start all over again. We also try to break sort of patterns. We released ‚Satellite‘ as a single before that last year and also a little bit of a short film, ‚Cabin Pressure Drops‘, which was highly unexpected, I guess and it made people confused because they thought it was the first single from the album because it was released so close to the album, but it was a completely separate unit. I think that’s something we’ll keep on doing, but in the end, the album is also extremely important to us, that it’s got to have the right flow. On this album, we feel maybe the songs are more connected, even though it’s maybe more diverse than ever at the same time.“ On finding the time to do THE NIGHT FLIGHT ORCHESTRA when its members are involved in other bands: Björn: „We’ve been trying now to sort of separate the touring cycles and also album cycles because nobody is going to be happy if we do everything at the same time. Both me and David [Andersson, guitar] are in SOILWORK as well. THE NIGHT FLIGHT ORCHESTRA has been growing so much in the last few years. We’ve had discussions with the other guys in SOILWORK and they also recognize the band is growing. I think it’s important for me and David to be able to do two things, but not at the same time. For this year, it’s pretty much going to be only about THE NIGHT FLIGHT ORCHESTRA. There’s going to be some SOILWORK singles and shows here and there, but no full tours. That’s what we’re going to do — we’re going to divide the album cycles and touring cycles. Last summer, we did three festivals with both bands, same day, same stage, with one hour in between. That was really weird. It worked out fine, but we want to try to avoid that for the future.“ „Aeromantic“ was released on February 28 via Nuclear Blast. The album was recorded at the Nordic Sound Labs using the same drum kit that was used during the recordings of ABBA’s 1980 mega album „Super Trouper“. 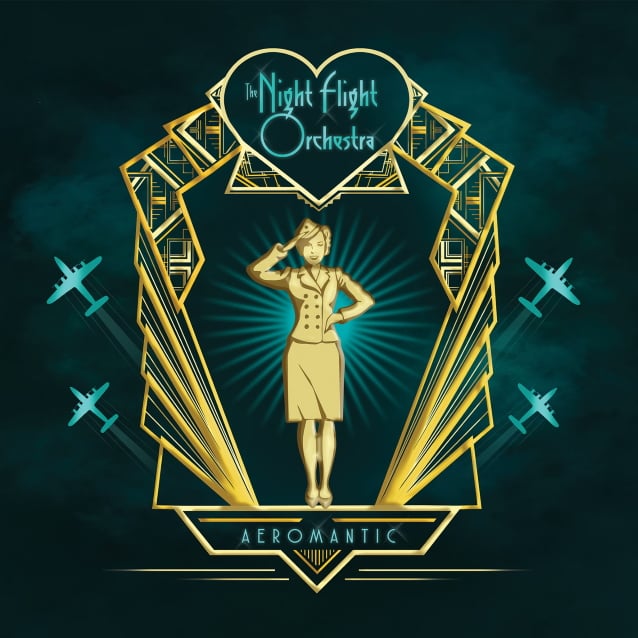