ANTHRAX singer Joey Belladonna’s newly launched JOURNEY tribute band, JOURNEY BEYOND, played its first concert ever last night (Friday, March 6) at The Beacon Theatre in Hopewell, Virginia. Fan-filmed video footage of the entire show can be seen below (courtesy of YouTube user „Dennis Justus„). The setlist was as follows: 01. Intro/Separate Ways (Worlds Apart)
02. I’ll Be Alright Without You
03. Girl Can’t Help It
04. Who’s Crying Now
05. Wheel In The Sky
06. Open Arms
07. Only The Young
08. Lights
09. Ask The Lonely
10. Any Way You Want It
11. Send Her My Love
12. Still They Ride
13. Be Good To Yourself
14. Lovin‘, Touchin‘, Squeezin‘
15. Oh Sherrie
16. Don’t Stop Believin‘
17. Stone In Love
18. Faithfully Belladonna announced JOURNEY BEYOND’s formation in a social media post on March 2. He wrote: „I am happy to announce the debut of JOURNEY BEYOND, a tribute to the legendary band JOURNEY. It is my pleasure to welcome my new band out of Nashville and we are very excited to hit the stage together. „Our first show is coming up this Friday, March 6 in Hopeville [sic], VA at The Beacon Theatre. We are excited to be performing a night of JOURNEY’s timeless hits and we look forward to seeing some new fans in the crowd!“ Joining Belladonna in JOURNEY BEYOND are keyboardist Doug Carter, bassist Paul Arntz, guitarist Matt Basford and drummer Justin Ward. When he is not busy touring and recording with ANTHRAX, Belladonna has been spending time playing drums and singing for a classic-rock covers band called CHIEF BIG WAY. The upstate New York-based group, which also features Dave Mickelson on bass, Joe Precourt on guitar and John Goodwin on keyboards, plays versions of songs from JOURNEY, AC/DC, ZZ TOP, BOSTON, CHEAP TRICK, FOREIGNER, PINK FLOYD, VAN HALEN, COLLECTIVE SOUL, THE WHO, THE DOORS, SHINEDOWN and BON JOVI, among others. In a 2005 interview with MusicDish, Belladonna was asked about the rumor that he came to the table with a JOURNEY tune during his 1985 audition for ANTHRAX. „Actually, what happened was I went into the room and they said, ‚Just go on in,‘ and they hadn’t heard me sing,“ he said. „They’d heard of me and they asked me to come in, but we were going in to start tracking and stuff, to get the mic set up and all that and they said, ‚Let’s get you in there and get you warmed up.‘ I hit the mic and belted out some JOURNEY… I think it was [the song] ‚Lights‘. I didn’t know what the hell I was getting into in the first place. I just wanted to lay some vocals or something. Just to kinda give an idea and that’s what happened. It wasn’t really anything more than that. I just kinda belched it out. I think I did ‚Oh Sherrie‘ [written by JOURNEY singer Steve Perry], too, or something. I dunno why, but I just did. It was something off the top of my head I could do a cappella and it was kinda challenging. I thought maybe in range or something that would be kind of intriguing. It was definitely one they weren’t expecting.“ ANTHRAX’s 2013 EP „Anthems“ EP included the band’s cover version of JOURNEY’s „Keep On Runnin'“ alongside classics by RUSH, THIN LIZZY, AC/DC, CHEAP TRICK and BOSTON. 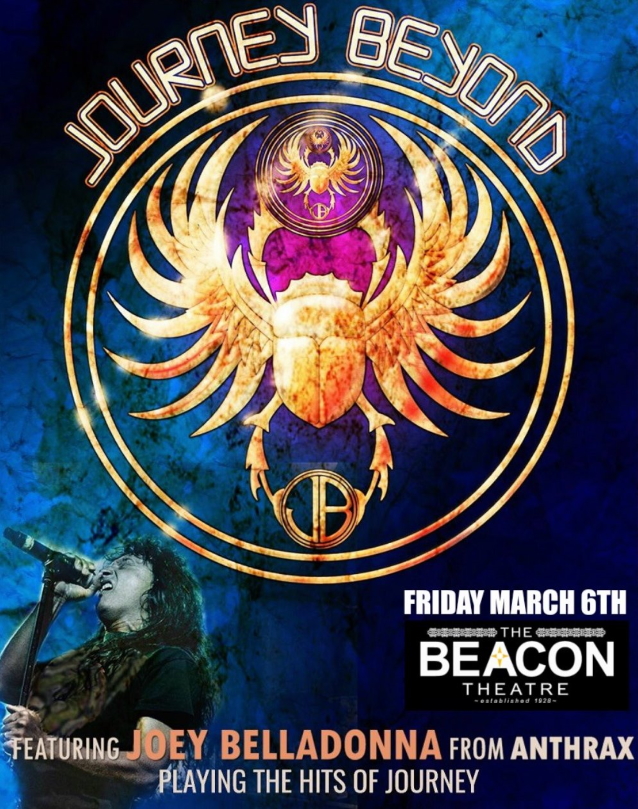