Legendary progressive rock band URIAH HEEP will celebrate its 50th anniversary with a fall tour of the U.K. The six-date trek will kick off at Glasgow’s Royal Concert Hall on November 1 and conclude at Cardiff’s St. David’s Hall on November 7. Guitarist Mick Box comments: „Who would have imagined back in 1970 that URIAH HEEP would still be here celebrating their 50th anniversary? „It is an amazing feat especially as the band are still a vibrant force in the live arena and still producing albums like the latest one ‚Living The Dream‘, that has been lauded by the fans and media alike as one of their best in their career. „It is with great pride that we enter this 50th anniversary with the same passion, desire and love of what we do, and long may it last. There are still horizons to conquer and new songs to write and perform, and it feels like the adventure has just begun. „A big thank you has to go to the fans that have kept with us every inch of the way, and they just keep growing in numbers by the day. Feeling good, you bet I am! ‚Appy days!“ Tour dates: Nov. 01 – Glasgow, UK @ Royal Concert Hall
Nov. 02 – Gateshead, UK @ Sage
Nov. 03 – Manchester, UK @ Bridgewater Hall
Nov. 04 – London, UK @ The Palladium
Nov. 06 – Birmingham, UK @ Symphony Hall
Nov. 07 – Cardiff, UK @ St. David’s Hall Tickets go on sale on Friday, February 28 at 10 a.m. GMT. Last fall, Box told Greece’s Rockpages TV that there is no end in sight for the band. „I think that with this band as it stands, there’s so much creativity going on, so much passion for what we do, there’s no need to put those road blocks up,“ he said. „We are looking at the new album; we’re looking at the 50th anniversary; we’re looking at everything in the future. And nothing’s going to stop us. The only thing that will stop is our health. As long as we’ve got our health, we’ll continue rocking.“ URIAH HEEP’s current lineup consists of Box alongside keyboardist Phil Lanzon, vocalist Bernie Shaw, drummer Russell Gilbrook and bassist Davey Rimmer. 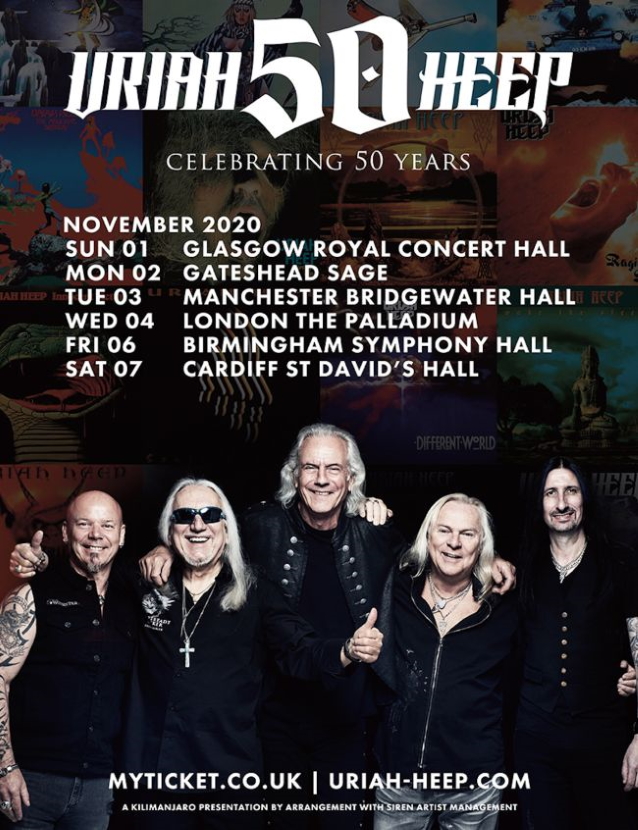