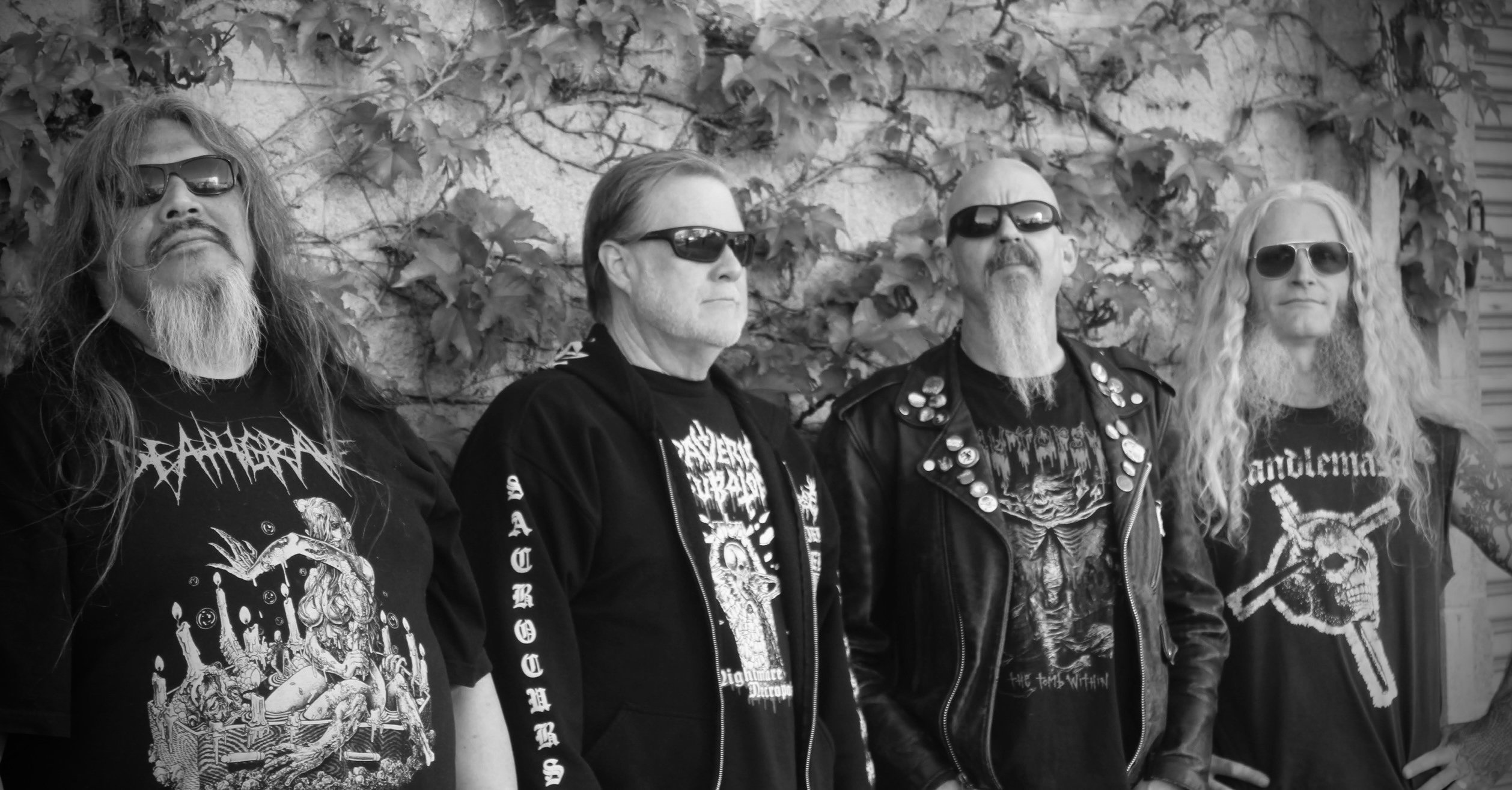 Fathers of grimy, slimy, sticky, icky death metal Autopsy are poised to uncork their first full-length album of new material in eight years this September. Morbidity Triumphant (out September 30 through Peaceville Records), is an unquestioned and uncompromising Autopsy record, in all its blood and guts glory.

In advance of the momentous metal occasion, founding member and vocalist/drummer Chris Reifert sat down with Metal Injection for an examination of 30-plus years of the band and their long awaited new album, his thoughts on Autopsy’s formative years and early albums, the „incident“ at the 2022 Maryland Deathfest and other batshit crazy show moments, his recollections of working on Death’s Scream Bloody Gore (which celebrates its 35th anniversary in 2022!) and much more!

„It’s not like we’ve been sitting around with our thumbs up our asses either. After the last full length we did two mini albums and then a live album and then jumping around airports and airplanes doing shows all over the place.

„So we’ve been super busy, but just in terms of an actual proper full length, I don’t really have a proper explanation. It’s just the time finally arrived and we seized the moment. It’s really as simple as that.

„I mean, it’s just more of what we do (the new record). I usually say, well, if you didn’t like us before this won’t change your mind and vice versa. If you liked us before you’ll probably dig it, it’s that simple. We’re not doing an experimental album or an acoustic album. We’re not going black metal or anything like that. It’s Autopsy, as simple as that.„

„Ultimately it’s got to fit the music, you know, that’s kind of the main thing. It’s got to be, lyrically, something that goes with what the riffs sound so that all the elements compliment each other. I guess I could put it that way.

„It was a breeze with him getting into the band. We met him years ago in the rehearsal building. He played in a couple of other bands too, and he’s got a room not only in the same hall as us, but his door faces ours in the hall. So we would just like see him around and be like ‚hey what’s up Greg‚ and say hi and stuff like that and then got to know him a little bit better and he recorded some of the Violation Wound stuff at his studio, the hardcore band. So we got to know him that way a little more.

„And then he recorded the last Autopsy mini album or whatever you want to call it, Puncturing the Grotesque. So he did that in the studio and then we did Static Abyss together. So we got to know him pretty well. And then Static Abyss was a good indicator of what it would be like to actually like not work with him as an engineer, but as a musician. That was just the two of us, so if there was a chance for awkwardness, that would have been it.

„It was just us and literally nobody else doing it because of pandemic purposes and stuff. And it was cool. It was just super laid back and fun and nothing was stressful or frustrating or awkward. We just got right down to having fun with it. It was great.

„I told Danny and Eric about that recording and like you know, this could be a good opportunity to test out what it’s like to actually make music with Greg. And it was great. So I gave him a good report card, talked to the guys after recording. We had him come down to the jam room and make some noise with us and hang out. And it was like, I don’t know, one of those meant to be things that was super easy. We didn’t have to debate. After he went home we didn’t have to be like ‚I don’t know guys what do you think?‘ It was just like, okay, there we go. Done. Super easy.„

On the Early Days of Autopsy

„When Eric and I started the band we were teenagers. We had zero responsibilities. You know, we weren’t in school. We might have had an odd job here and there, nothing like a career or whatever. So we had nothing else to do except just kind of hang out and play music and hang out together and listen to records and shit like that, watch movies and whatnot. So we had nothing else to do, you know? No responsibilities, no nothing. It made that super easy.

„This is the part that kind of baffles me of how we did all those things is we never had a rehearsal room. It was kind of funny back then. We had to wait ‚till a buddy’s parents went out of town and then they’d throw a party and we’d be like the band that played the party. And that was our rehearsal, you know? Yeah, seriously, we never had anywhere to practice. So like, ‚oh, I heard Mike’s parents are out of town for the weekend. Let’s go jam at his house!‘ Or he’d be like, ‚Oh, my parents are gone for a weekend. Come over and practice and I’ll throw a party while we’re at it‘, so stuff like that. So that kind of trips me out that we got to pull all those things off.

„But that was, I guess, the early days of the band and I think like ’90 or ’91 is when we actually got a proper rehearsal room. That made that part a little bit easier. But yeah, we were on fire at that point, just go go go and tour tour tour and all those things. And honestly, I kind of feel like that right now, too. We’ve been so fucking busy doing the album and all these traveling shows and stuff like that. So it feels just like that only we’re not 18, although we still feel like that in our heads when we do this stuff, which is pretty cool.

„But yeah, we’re not cranking out as much studio output, but we are looking to do another album after this one sooner. We’re not going to wait years and years again. We’d like to do another one to be released next year. Got to get back on track with that. But yeah, I don’t know, it’s cool. It feels good to be busy.„

On His Thoughts on Early Autopsy Records

„And honestly I think we’d all probably say this, even back then we didn’t really look back very much. You know, we’re always looking forward to the next thing because there’s always something to do, like a show to prepare for, a studio recording to prepare for. Maybe someday when I decide to not play music anymore, which would probably be when I die, I’ll sit back and listen to records from the past or whatever. But I don’t even really listen to those because I’ve already heard them a lot.

„Normally when we do a new album you listen to it like a thousand times as soon as you get out of the studio and just play it to death. And then we get our copies in the mail, the finished thing, I’ll listen to it a couple more times and then just file it away in the archives and start working on the next one. So the eyes are always on the prize, which is the next activity or event or whatever.

„So yeah, I wouldn’t change anything. I think all those records are Autopsy, the old ones and the middle ones and the new ones. I back all of it up, 100%.„

„I mean that one definitely raises the bar for noteworthy activities I’ve actually seen. Someone alerted me that there’s a very very up close footage of that, graphically close. We’re talking like a tampon string grazing a nose and a forehead and the whole thing. It was even more raunchy than we even realized at first. At first we just saw pictures like, ‚oh, that’s cool. There we go. I’m glad they’re enjoying the show.‘ Then I saw a little more up close and then I saw the up up up close stuff and was like well okay, commitment. You’re committing, that’s cool.

„You know, we didn’t know about that until after. We didn’t know anything was happening when we played because there were just all these people, you know, like pretty packed. And we were busy doing our job, which was playing music. So we had no idea anything out of the ordinary was happening until after the fact and someone was like, ‚hey, you know this thing happened? Here’s the footage.‘ We’re like, ‚Oh thanks, no, we have no idea.‘

„People ask about it, and all I can say is at a show we provide the soundtrack. And what people decide to do along with the soundtrack is up to them. As long as no one’s going around punching innocent people in the face or some shit like that, if you want to get weird, go ahead and get weird. That’s fine.

„Funny story, the next show we played was in Portland and by then everyone was asking about Maryland. Like ‚hey did you know about this thing?‘ Yeah, yeah of course. So I guess someone decided to have fun at that show, too. So first of all, the show started off and there was a fist fight in the venue before we even got to play. So there was that.

„And then we played and then we discovered after we played again that someone had taken a shit in the pit and got kicked out for doing that. I don’t know how you could even do that, but I guess you can. That was not very creative, but whatever.

„That’s probably like the most noteworthy things I can think about off the top of my head. Mostly it’s just people watching us and thrashing around and stuff like that. That’s mostly what happens. But I kind of wonder what the future is going to hold now. Is anyone going to feel competitive or what?„

„I’ll just say it definitely blew my mental doors open because going into a big professional studio and a big professional label. I was 17 years old when I was doing that. I was just a greasy, fuckin‘ dumb ass teenager spending my summer doing something fun.

„Yeah, I don’t know. It was a mind blower, I’ll tell you that. I’m still stoked that it happened. It’s kind of a cool, rare thing, so I“m definitely proud of it for sure, 100%. It was just one of those right place at the right time things. The whole chain of events was really, really unique, I can put it that way. Just how it all came together and how I fell into it and all that. I look back and I’m like man, I was a lucky son of a bitch.“