T oday we look at the Luxury & Precision LP6, one of the most expensive R2R DAPs on the planet, costing $4,399 USD.

It’s not the first time we feature the Chinese Luxury & Precision on Headfonia.com and we have looked at their L3, L3PRO and L5PRO and L6 before. L&P still after all these reviews is a bit of a mystery company on this side of the world and their Chinese only website doesn’t really help in that regard. Luxury & Precision isn’t as famous as Enrico Pallazzo, that’s for sure, but I did manage to meet the sales director when he was visiting Antwerp’s Chinatown.

The social media pages which they launched a while ago have all disappeared and only one Japanese old Facebook page remains. This is not going to help to increase the brand’s notoriety, but it is what it is. There do are several L&P threads on Head-Fi, but there’s no dedicated LP6 GE thread, there however is a LP6ti thread which is the top level version of the DAP we’re looking at today.

The general idea about Luxury & Precision DAPs is that they look and feel luxurious, sound extremely good but that they are very basic in features and usability. Music first has been the L&P philosophy so far and on one hand that’s really good as they do sound exceptional, but on the other hand, it’s 2020 and DAPs should have basic functionalities. We’ve been asking L&P for some simple things and it seems they have finally started listening. The L6 saw the introduction to limited swiping (still present in the LP6) and the brand new L4PRO seems to be a fully modern DAP. You can find out about that one right here.

The L&P LP6 isn’t featured on Luxury & Precision’s own website but you can find it on the famous Penon Audio website here: https://penonaudio.com/luxury-precision-lp6.html? 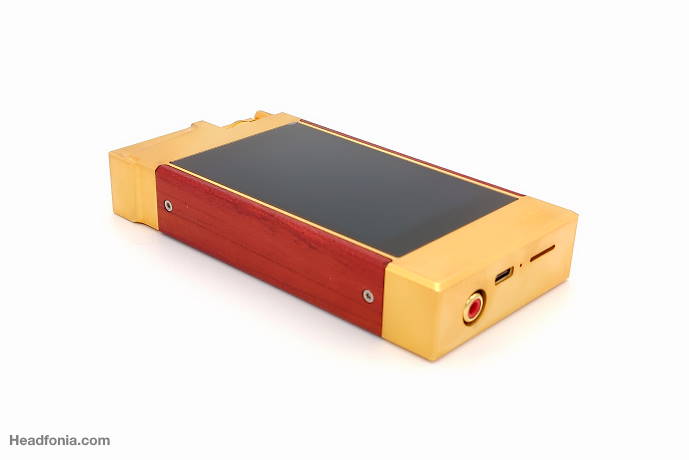 So what’s so special about then LP6 then? For sure that must be the Intel large-scale FPGA and two ultra-high linear industrial grade R2R decoder chip. And then there’s the fact that the power supply for decoding and amplification is completely independent.

The L&P LP6ti flagship was built to drive full-sized headphones and this normal LP6 version also does exactly that. Compared to the ti version the power output has been reduced to make it work better with IEMs, but it’s still very potent in this regard. As such it has high driving power but with extremely low background noise. The LP6 has very low distortion and ultra-high dynamic range.

The LP6 comes delivered in a very simple box but it has a beautiful wooden box on the inside, for the price it’s the least you can expect, though you’re especially paying for the technology inside the DAP. Inside the box you find a USB-Cable, a 6.3/3.5mm adaptor, a pair of screen protectors and a Chinese quick start guide. My LP6 came with a leather case, but I’m not sure if it is a regular accessory. We had the same happen to us when we received the L6, so I wouldn’t be surprised of the leather case isn’t part of the normal package. Which, at this price point, is rather crazy.

You either love or hate the Luxury & Precision DAP design. I for one really dig it. All L&P DAPs look beautiful with the unique edges, incorporated volume control on top and the beautiful wooden back panels with the L&P logos. With the LP6 this is a bit different though, and the wooden back now “runs” through to the front sides of the player. Its not something I particularly like but with the DAP in its case, this isn’t noticeable anyway. The wood on its own does look great as we’re used to. 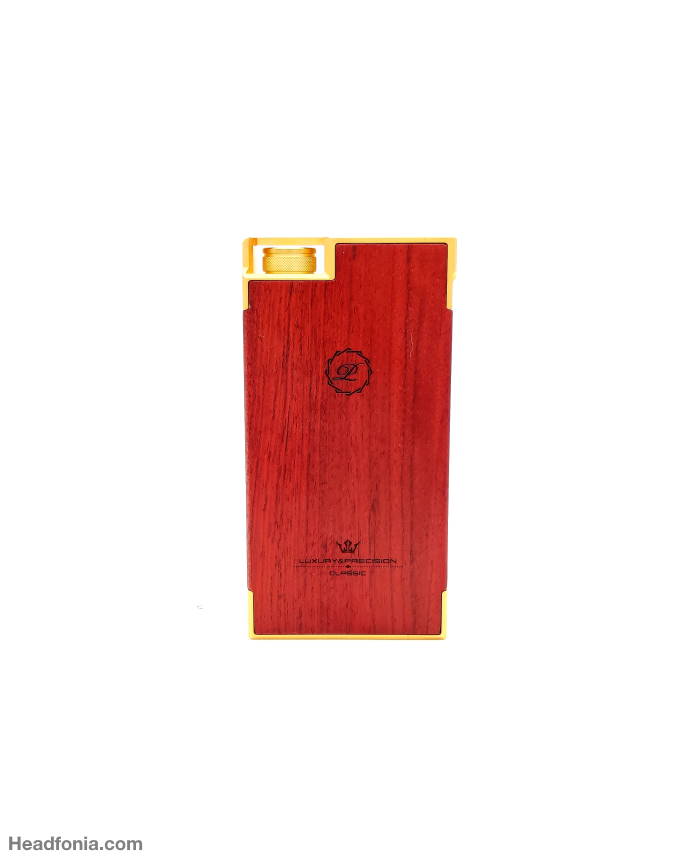 If not the first thing, the gold/brass look will be the second thing you notice. A lot of people absolutely love it (look at the WM1Z) but if I could choose the colour, it wouldn’t be gold. It however does look and feel soft and smooth. The Luxury & Precision logo on the lower front of the DAP  – because of the brass enclosure – also isn’t very visible, but the case would hide that anyway.

Talking about the case, I have always stated that the L&P cases were the best because of the precise fit, choice of leather and their soft feel. But this case is different. It’s thicker, built from a different kind of leather, and it’s red-ish. It’s not my thing but with a +$4K DAP, you’ll want to use a/the case.

Design-wise there isn’t anything really new, except for the fact that this thing is big and heavy. Without the case the player weighs an impressive 410g, with the case included that becomes 453g. For your reference the new AK SP2000 with case weighs 459g. All the materials used are top notch and the L&P LP6 screams luxury with its perfect finish.

The LP6 DAP features a 3.5 inch screen with a resolution of 480x320px, an ALPS volume control, a 4800mHa battery and only 64GB of internal memory which can be extended by 256Gb by using a microSD card. The battery life of this DAP depends on the headphones used, the screen usage and file types “played”. It’s not the very best on the market but it didn’t disappoint either.

For the full specs and features, check the L&P LP6 page on Penon.

The L&P LP6 article continues on the next page, just CLICK HERE.