Today we’ll be taking a look at the Meizu HiFi Audio Pro, a $54.99 USD ‘dongle’-style headphone amplifier and DAC.

Note: The Meizu HiFi Audio Pro was sent to us directly by HiFiGo for the purposes of this review. As always, our thoughts and conclusions are our own, and we appreciate the opportunity.

If you’ve clicked on this article in the future, you might be joining us at a point in time where the 3.5mm headphone jack is no more. Extinct. Kaput. At the time of writing, it’s becoming very much the status quo for smartphone makers to ship their products without a 3.5mm headphone jack. The Apples, Samsungs, and Googles of this world are opting to save on-board space on their devices, instead favouring to transmit off-board audio via USB-C (in the case of Android phones) or Lightning (in the case of Apple ones). And of course, wireless is very much the preferred consumer option these days – Bluetooth’s convenience outweighing the ever-reducing sonic benefits of a wired connection in the mind of your average Joe or Joanne. The venerable TRS-style headphone jack can trace its roots back to the 1870’s and we owe its continued existence to one simple fact: it works. It’s sturdy, and transmits sound pretty much, well, perfectly.

For the audiophiles among us, there’s simply no substitute for the fidelity of a quality wired connection. And with phone manufacturers either removing the 3.5mm jack, or shipping their devices with sub-par, mass-manufactured DAC chips, the ‘dongle’-style DAC/amp is becoming an attractive proposition for listeners who want to extract better audio quality from their devices while continuing to enjoy traditional wired headphones. Chinese manufacturer Meizu has taken a punt that there’s enough of a market to offer an upgrade to their onboard audio with the release of their newest ‘dongle’-style DAC/amp, the HiFi Audio Pro. Readers may not be aware that Meizu is chiefly known for the manufacturing of smartphones in their native China, and so they have designed the HiFi Audio Pro to be the perfect audio companion for their line of phones. 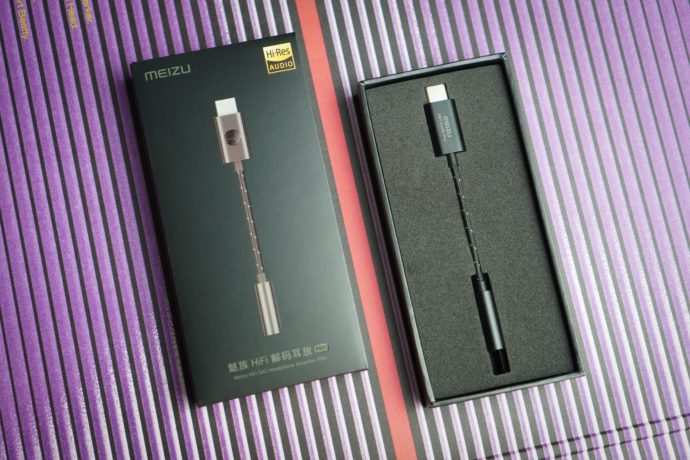 The HiFi Audio Pro is an extremely simple and compact device at first glance. Weighing a mere 4 grams, it has a USB-C connection at one end to connect to your device and a 3.5mm headphone jack at the other end, with a short ~5cm flexible fabric-sheathed cable connecting them. And that’s about it – there are no physical controls on the device, meaning that everything is managed in the digital domain on-board your device. USB-C is very much becoming the industry standard for connectivity and as an Android-user myself, it’s very welcome in my books. The ‘first wave’ of dongle DACs, spearheaded by Audioquest’s Dragonfly range opted for a full-size USB connection, chiefly with transportable laptop-usage in mind. Audioquest has persisted with this topology, which is still in use with their latest top-of-the-line DAC/amp, the Dragonfly Cobalt, reviewed here by Lieven. I’ve owned Dragonfly devices in the past, and I haven’t been the hugest fan if I’m being honest. Sure, the sound is a noticeable upgrade from your garden-variety smartphone or laptop, but the full-size USB connection is too cumbersome in my opinion. For starters, mobile use requires the addition of an OTG (On The Go) cable to link-up to your phone, and connecting them directly to your laptop is perilously fraught with the likelihood that your fancy dongle will simply snap off with the slightest slip.

The HiFi Audio Pro ships in an appropriately small matte-black box, with the requisite ‘Hi-Res Audio’ mark emblazoned on the front giving a hint of the digital smarts packed-inside. The HiFi Audio Pro has been equipped by Meizu with a Cirrus Logic DAC chip, the CS 43131. Impressively for such a diminutive device, the HiFi Audio Pro is cable of decoding 1’s and 0’s up in the PCM realm up to  32-bit / 384kHz, and DSD of either the 64 or 128 variety. The USB-C device is play-and-play, and compatible with Android, Windows, and MacOS systems.

Meizu has equipped the HiFi Audio Pro with a two-stage Texas Instruments op-amp chip, the OPA 1622, which they claim is capable of dynamic current swings of up to +145/-130mA. Meizu has made it clear that this tiny dongle isn’t just intended for use with IEMs – they suggest that it’s suitable for pairing with any headphone between 16 and 600 ohms impedance, with the in-built amplification stage being able to adapt to the output load accordingly. The HiFi Audio Pro draws its power supply directly from the source device – there is no on-board battery or need to charge it. While the HiFi Audio Pro’s total output figures look fairly modest on paper – 30mW of power at 32 ohms and 6.7mW at 600 ohms – in theory this should be able to get most headphones well into the hearing-damage volume range without too much trouble. I don’t have any 600 ohm headphones on-hand at the moment to put this to the test, but the HiFi Audio Pro easily gets my 300 ohm Sennheiser HD650 singing at around 90% on my phone’s volume dial, and it still sounds like it can threaten to unleash more power if called for (which I won’t, thank you). The combination of digital and analogue stages results in an impressive Total Harmonic Distortion and Noise of less than 0.0003%, and dynamic range well beyond the capabilities of human hearing at 120dB. 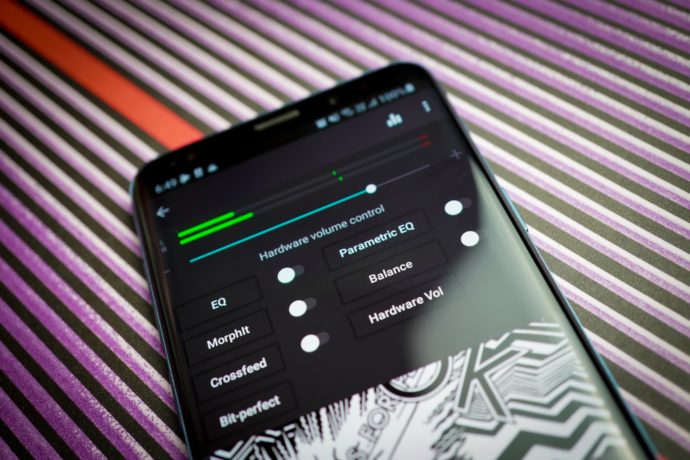 I keep a 400gB micro-SD card on-board my Samsung Galaxy s9+, containing nearly my entire FLAC music library. Plugging-in the HiFi Audio Pro prompted my device to open-up the USB Audio Player Pro app, and use the device as the sound output. Within the app, volume is then controlled during playback using either your smartphone’s physical volume buttons, or via the volume slider in your app of choice. The HiFi Audio Pro also worked seamlessly as the audio device directly of my phone’s Tidal app which was nice to see – occasionally I’ve had trouble in the past playing audio natively from the official Tidal app, but you may need to make some tweaks with your device’s USB setting via the Android developer options. Once I set my device to automatically recognise/select the HiFi Audio Pro as the DAC audio output, using it was a piece of cake – I simply plugged it in, and ‘voila’ – it essentially became like the device’s headphone jack. Pleasingly, the HiFi Audio Pro also works with video too, working happily with both the Youtube and Netflix apps. 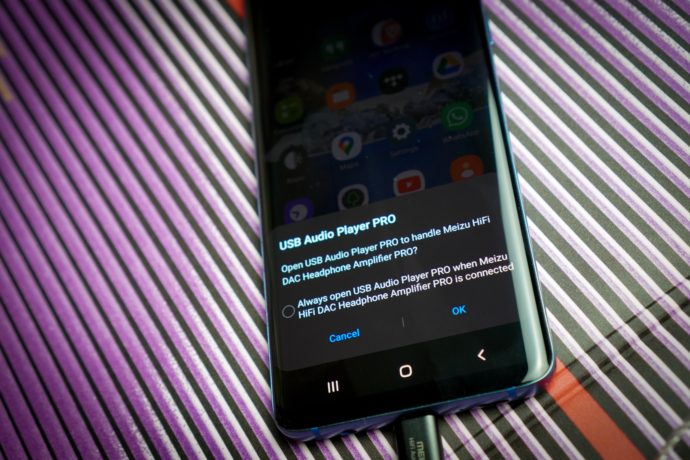 Being powered via your device’s battery, the HiFi Audio Pro will place some additional drain on it. With an hour or so’s playback at average listening levels, my S9+’s battery was sitting around the 75% level after a full-charge to begin with. Sure, it’s higher than normal but it’s not terrible. I found it easy to simply park my phone on a wireless charging dock, allowing it to stay charged whilst keeping the USB-C port free to play music with via the HiFi Audio pro.

Occasionally the HiFi Audio Pro did make a couple of mild ‘squawking’ noises while plugged into my phone, which sounded a little like RFI interference. It was only occasional and not loud enough to interrupt my listening experience, yet was still audibly present from time to time. Your Mileage May Vary.

The review continues over the jump on page 2.