Fan-filmed video footage of SOULFLY’s entire September 23 concert at Alex’s Bar in Long Beach, California can be seen below. FEAR FACTORY’s Dino Cazares is playing guitar for SOULFLY on the Max Cavalera-fronted band’s current U.S. tour which kicked off on August 20 at Launchpad in Albuquerque, New Mexico. The 33-date trek will conclude tonight (Saturday, September 25) in Tempe, Arizona. The final date will be a family celebration as it will include performances by INCITE, GO AHEAD AND DIE and HEALING MAGIC. Joining the band for select dates are NIVIANE and SUICIDE PUPPETS. Max recently told Heavy New York about Dino’s addition to SOULFLY’s touring lineup: „I’m hugely inspired and excited and happy that Dino is doing this with us. Dino is an old friend. Our friendship goes back to the early days of SEPULTURA coming to America. I believe we met on the ‚Beneath The Remains‘ tour. For sure by the ‚Arise‘ tour we were friends. He tells the story better, but he had to wrestle me [over] the [FEAR FACTORY] demo tape that had ‚Big God‘ on it. I loved it. I was listening to it on his Walkman. I didn’t wanna give it back to him. And it was his only copy. And we had to wrestle. He finally got it out of me. But I ended up bugging [then-Roadrunner Records A&R executive] Monte Conner at that time and saying, ‚You’re a fool if you don’t sign this band.‘ I think I even called them ‚the future of metal‘ at that time. I was, like, ‚This is the future of metal.‘ If you pass on it, you’re a fool. And then Monte signed them, and the rest is history, as they say.“ He continued: „That’s why this link, this possibility, the situation that happened and we needed somebody to fill in, I couldn’t think of a better person than Dino — musically and as a friend. ‚Cause we’re still very hurt, mostly from the stuff that [former SOULFLY guitarist Marc] Rizzo has been saying [in the press] — it hurts us a lot. And it’s good to have a friend that you could talk about it. And then musically I think it’s insane. To think of songs, especially the songs that have crunchy guitars, I close my eyes and I imagine Dino’s sound on some of those songs, like ‚Downstroy‘ and ‚Babylon‘… ‚Cause there’s a lot of chugging — SOULFLY always had chugging. But Dino is a whole another level of chugging. [Laughs]“ When his addition to SOULFLY’s touring lineup was first announced, Cazares said in a statement: „The first time I met Max in 1991, I knew we were going to be longtime friends. I was standing at the bar, he grabbed my arm and yelled ‚Papa Capado.‘ I was like ‚who the F@#% are you? He said ‚I’m Max‚ and from there we just hit it off. That same night I played him the FEAR FACTORY demo tape on his cassette Walkman in his hotel room while we were attending a music convention in Los Angeles. He liked it so much that he wouldn’t give it back, so I had to wrestle him and take it out of his Walkman, haha. It was my only copy. Max told Monte Conner, the A&R director from Roadrunner Records, that we had a new demo that he needed to check out, so our manager at the time sent our demo to Monte after many labels turned us down. The rest is history. „Over the past 30 years, I’ve guested on a few of Max’s projects and jumped on stage whenever and wherever I could. Now it’s a great honor to be doing this tour alongside Max as the second guitarist. It’s going to be amazing for all the fans to see the two of us playing a selection of SOULFLY songs and a few familiar extras. „Much respect to Max and his family — thank you for always making me feel at home with the SOULFLY Tribe. Let’s do this!!!! Um Dois Três Quatro“. Although Rizzo’s departure from SOULFLY wasn’t officially announced until August 7, it was widely speculated that he was out of the group two days earlier when it was revealed that Dino would play guitar for SOULFLY on the current tour. Last month, Max told Metal Kaoz that Marc has been spewing out „lies and bullshit“ in some of his recent interviews regarding his exit from SOULFLY. „All these accusations — it hurts,“ he said. „It hurts to hear. After everything that we did for him, which was a lot — we put him on all the records and always took really good care of him, always really, really gave good treatment to him. To hear him backstabbing us like that, it’s just not nice. He’s obviously trying to get fans to be against me and make him the victim… It just sucks to hear all that. It definitely hurts me when I hear all these accusations that I know are lies and bullshit; it’s all fabricated by his crazy mind. I don’t know. It’s a strange situation.“ He added: „I don’t want to turn this into an ugly thing. I don’t wanna talk bad about him; I really don’t. Of course I don’t like those accusations, and it’s bullshit, but he has the right to say whatever. But I think we treated him really good through all those years. We put him on the map pretty much. When he joined the band, not many people knew him. Just a little bit of gratitude would have been nice. Because even on ‚Max Trax‘ [Cavalera’s a twice-weekly Internet video series in which he discusses the inspiration for many of the songs spanning his nearly 40-year music career], when I mentioned that I fired him, I thanked him for the 18 years of SOULFLY, and I said good luck on his projects. I’m not bitter. I don’t wanna be a bitter guy.“ 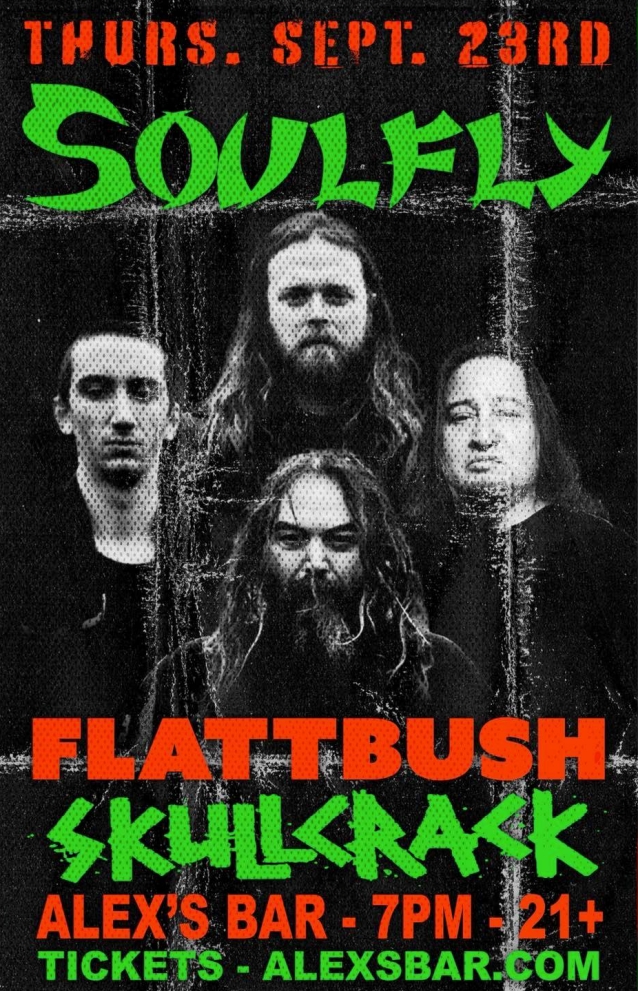