Two people were arrested earlier this week after they crashed a car into a Birmingham, Alabama club where P.O.D., FROM ASHES TO NEW and ALL GOOD THINGS were performing. According to the Birmingham Police Department, the suspects allegedly drove their car into the Zydeco Bar shortly before 10:30 p.m. Tuesday (September 21). After the crash, the suspects fled the scene before being taken into custody. Several people at the bar said that the driver was kicked out of the venue earlier in the night. One person sustained minor injuries. FROM ASHES TO NEW vocalist Matt Brandyberry later shared a video on social media in which he explained the circumstances that led to the crash. He said: „Apparently, what happened was this dude got kicked out of our show tonight. And I guess he got mad at the security guard for doing that. I guess they got into a fight and, from what I’m hearing, someone pulled a gun — security pulled a gun or something like that — and they got into a fight. And then this dude left… I guess what ended up happening was after he left, he came back with his car and he tried to run the security guard over. … This dude ran his fucking car into the bar, into the club. … I guess he must’ve hit the security guard, but the security guard seems fine; he’s bleeding, but he seems like he’s fine. But the dude who’s driving the car is mangled. The dude is, like, all messed up.“ Photo courtesy of Birmingham Police Department

There’s a car in the bar Posted by Tony Filipic on Tuesday, September 21, 2021 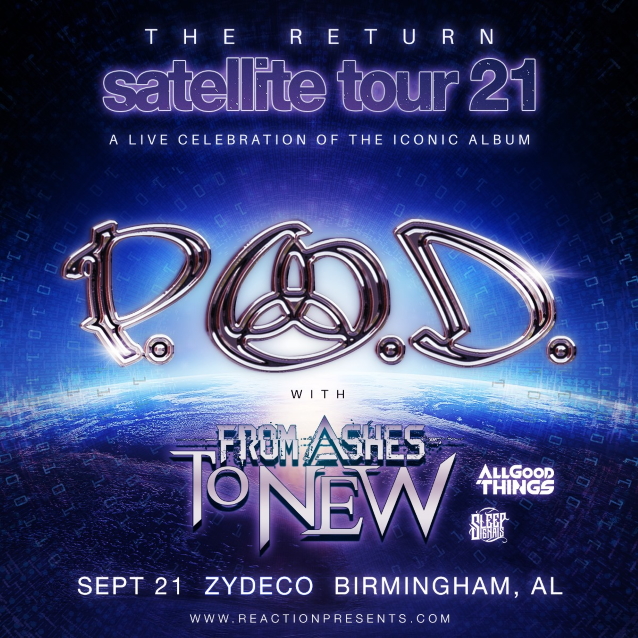