Following a successful global cinema release, Trafalgar Releasing and Anthem Entertainment have announced that starting on October 1 at 9 p.m. ET through Sunday, October 10 at 11:59 p.m. ET, RUSH fans worldwide can view „Rush: Cinema Strangiato – Director’s Cut“ at home, on demand. Visit www.cinemastrangiato.com for more information and to purchase access for $15. „Rush: Cinema Strangiato – Director’s Cut“ celebrates the „Holy Trinity of Rock“ (Geddy Lee, Alex Lifeson and Neil Peart) and 40 years of their „Moving Pictures“ via an alternate „director’s cut“ of the 2019 feature, giving audiences a special look into „R40 Live“, with a revamped setlist including the new addition of bonus tracks „One Little Victory“ and „Red Barchetta“, as well as „Cygnus X-1“ / „The Story So Far“ featuring Neil’s final recorded drum solo masterpiece. Additional favorites include songs such as „Animate“, „Closer To The Heart“, „Subdivisions“ and „Tom Sawyer“ along with backstage moments and candid footage from the cutting-room floor. The Director’s Cut also includes soundcheck performances of the fan-favorite „Jacob’s Ladder“, exclusive interviews with Tom Morello, Billy Corgan, Taylor Hawkins, producer Nick Raskulinecz, The Trailer Park Boys, violinist Jonathan Dinklage, and more surprises. On Friday, October 1 at 9 p.m. ET, Rushcon will host a live virtual „Interactive Watch Party“ for fans to connect and discuss the film when it premieres online. Those who purchase a watch party ticket will maintain access to the content for the entire duration of the VOD window, but only those who log in during the live October 1 event will be able to participate in the chat. „We are delighted to bring ‚Rush: Cinema Strangiato – Director’s Cut‘ into the homes of RUSH fans worldwide following its recent success at the box office,“ said Kymberli Frueh, Trafalgar Releasing SVP of content acquisitions. „This will be the first time that the film is available in many countries where a theatrical event was not possible and offers fans around the world a chance to watch together.“ When released in cinemas worldwide, „Rush: Cinema Strangiato – Director’s Cut“ charted No. 4 overall for the North American box office on September 9; ranked No. 2 for the per-screen average for the day in North America, behind only Disney’s „Shang-Chi“ and „The Legend Of The Ten Rings“; and was No. 5 overall for the U.K. box office. RUSH singer/bassist Geddy Lee told the 93.3 WMMR radio station about „Cinema Strangiato“: „What it is is basically a way of celebrating the ‚R40‘ tour in the sense on a big screen. It’s taking a lot of stuff that fans might have seen on that video, the concert footage, but it’s added a few twists to it — there’s some soundcheck footage, there’s some pieces that people haven’t seen and haven’t been released, and there are interviews with various musicians blah-blah-blah-ing about us. [Laughs] So I think the intent of the record company, in that regard, was just to create something that you can’t have at home. Going into a venue with a ton of other like-minded RUSH fans and celebrating the final tour, as it were.“ Peart died in January 2020 in Santa Monica, California after a three-year battle with glioblastoma, an aggressive form of brain cancer. He was 67 years old. RUSH’s final show took place at the Forum in Los Angeles on August 1, 2015. Peart indicated at the time that he wanted to retire while he was still able to play well, along with a desire to spend more time at home with his young daughter. Lee and guitarist Alex Lifeson have repeatedly said that RUSH will never do a show unless all three musicians agree to take part. They haven’t performed as RUSH without Peart since he joined the band in 1974. 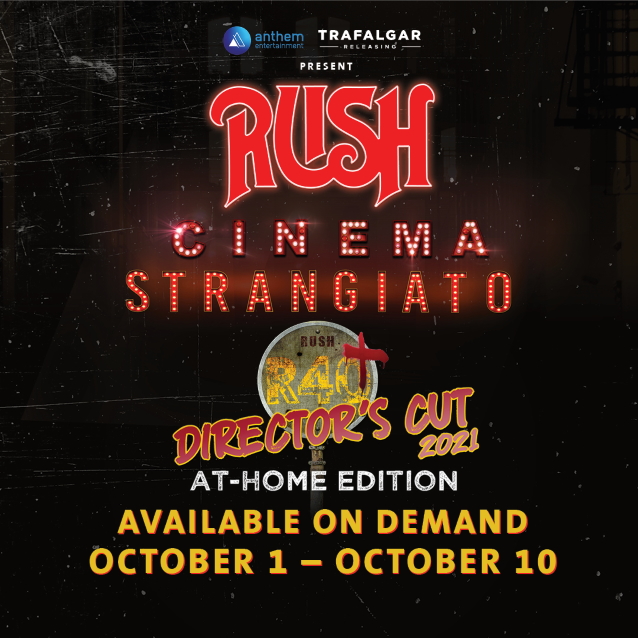