Alice Cooper and his solo band played their first concert in a year and a half last night at Ovation Hall at Ocean Casino Resort in Atlantic City, New Jersey. The band’s setlist was as follows: 01. Feed My Frankenstein
02. No More Mr. Nice Guy
03. Bed Of Nails
04. Rock & Roll (THE VELVET UNDERGROUND cover) (live premiere)
05. Fallen In Love
06. Go Man Go (live premiere)
07. Under My Wheels
08. He’s Back (The Man Behind the Mask)
09. Social Debris (live premiere)
10. I’m Eighteen
11. Poison
12. Billion Dollar Babies
13. Guitar Solo (Nita Strauss)
14. Roses On White Lace
15. My Stars
16. Devil’s Food
17. Black Widow Jam
18. Steven
19. Dead Babies
20. I Love The Dead
21. Escape
22. Teenage Frankenstein Encore: 23. School’s Out Fan-filmed video footage of the concert can be seen below. Prior to last night’s show, Cooper told Ultimate Classic Rock about returning to the road: „Everyone’s trying to remember where everything is, all the little moves. It’s really just getting your wings back. I think everyone’s just happy to get back on stage — it’s almost to the point of being giddy. It’s just about getting back on the boards and feeling comfortable with the show, and then all of a sudden you go, ‚Oh yeah, I remember what we did there,‘ or ‚I’ve always wanted to change that. Let’s change that now. I guarantee by the second show it’s gonna be back to what it was, and then I can start to think about, ‚Okay, now what…'“ Cooper will be joined by original KISS guitarist Ace Frehley for most of the remainder of the tour, which will run through October 23 in Atlanta, Georgia. Cooper, a Rock And Roll Hall Of Fame inductee, usually spends up to six months a year on the road, bringing his iconic brand of rock psycho-drama to fans both old and new, enjoying it as much as the audience does. Known as the architect of shock rock, Cooper (in both the original Alice Cooper band and as a solo artist) has rattled the cages and undermined the authority of generations of guardians of the status quo, continuing to surprise fans and exude danger at every turn, like a great horror movie. Alice Cooper concerts remain a „not-to-be-missed“ attraction. Cooper’s universally acclaimed new album „Detroit Stories“ is out now via earMUSIC. The record is a celebration of the sound and spirit of the golden era of Detroit rock, and debuted on the Billboard album sales chart at No. 1 upon release in February. The Associated Press called „Detroit Stories“ „a masterpiece of classic rock, soul and R&B in homage to the city that produced him,“ while Entertainment Weekly proclaimed the release „a love letter from Cooper to his city, and one that encourages a deep dive into his own back catalog and that of his peers.“ Variety deemed the album „a delicious tip of the hat to ’70s classics such as ‚Killer‘ and ‚School’s Out‘ without sounding like a throwback.“ Rolling Stone enthused, „That spirit of rock & roll abandon still exists in Cooper’s music half a century later, and his inherent showmanship is why people still fill theaters to see his guillotine act. It’s also why his records are still fun to listen to: You never know where he’s headed.“ „We’ve always had fun touring together and it should be a heavy rock show with Ace and a great way to get everyone back to live concerts again,“ says Cooper. „It should be a great night of virtuoso guitars!“ 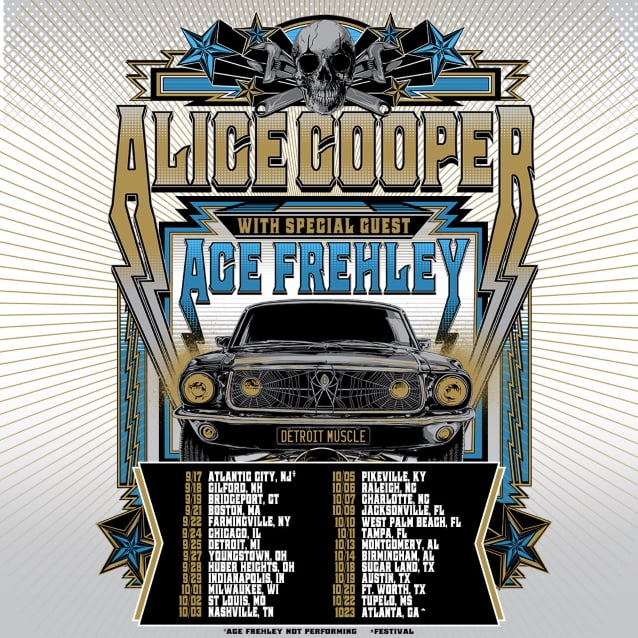