Former KISS and current GRAND FUNK RAILROAD guitarist Bruce Kulick will host a livestream event later this month. Dubbed „Bruce Kulick Live In Las Vegas“, the show will be filmed at the Marquee Club’s Library inside the Cosmopolitan Hotel and Casino in Las Vegas and will see Kulick joined by his wife Lisa, as well as his longtime collaborator Todd Kerns, who is best known as the bassist of SLASH FEATURING MYLES KENNEDY AND THE CONSPIRATORS. They will perform music from KISS along with songs made famous by THE ROLLING STONES, THE BEATLES, THE WHO, Elvis Presley and more. Get your virtual ticket now for $15 to watch the premiere on April 16 at 9 p.m. ET. The show will be available for purchase and to enjoy until the end of April. Last December, Kulick hosted another livestream event, „Kissmas Masquerade“, during which he played an acoustic KISS set accompanied by Kerns. In November 2019, Kulick celebrated the 35th anniversary of his first shows with KISS by performing a six-song „Animalize“ medley on the „Kiss Kruise“ with a band that consisted of Kerns and SLASH FEATURING MYLES KENNEDY AND THE CONSPIRATORS drummer Brent Fitz along with bassist/vocalist Zach Throne. The foursome’s set also included other ’80s and ’90s songs that KISS rarely, if ever, played live. Kulick joined KISS in 1984, soon after then-guitarist Mark St. John left the band after being diagnosed with Reiter’s Syndrome, a form of inflammatory arthritis. He recorded five studio albums with the group — „Asylum“, „Crazy Nights“, „Hot In The Shade“, „Revenge“ and „Carnival Of Souls“ — and can also be heard on the band’s „Alive III“ and „Kiss Unplugged“ live sets. He joined GRAND FUNK RAILROAD in 2001 and continues to serve as the band’s lead guitarist today. Bruce is heavily featured on „Kissology – Vol. 2“ and „Vol. 3“, the DVDs spanning KISS’s historic five-decade career. 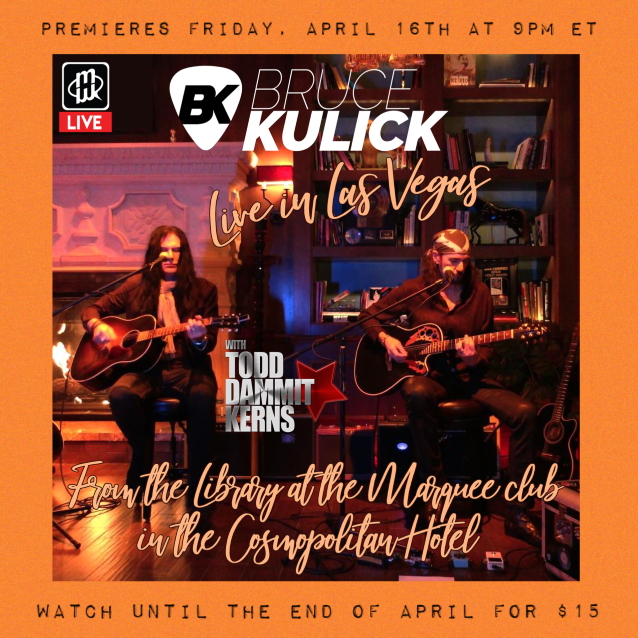